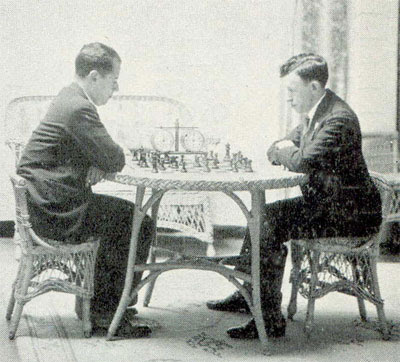 Capablanca - Kupchik, Lake Hopatcong 1926
Abraham Kupchik (1892-1970) was one of the best players in the United States between the Wars, but never developed an international reputation because he almost never played abroad (with the sole exceptions of Havana 1913 and the 1935 Warsaw Olympiad, which serve practically as bookends to his career). He won the Manhattan Chess Club championship eleven times (once shared), the New York State Championship twice (1915 and 1919), the National Chess Federation title at Bradley Beach 1928, and the Western States Championship (then the equivalent of the U.S. Open) in 1925. His strong performances at the two Lake Hopatcong tournaments of 1923 (shared first with Marshall) and 1926 (second to Capablanca) are the best proof that he was probably of high-IM or low-GM stength--an idea supported by his tie with GM Carlos Torre in a 1924 match. As Sam Sloan notes, despite the fact that Kupchik's play was confined to New York and New Jersey, he defeated most of the best players of his age including "Bogoljubov, Marshall, Chajes, Bernstein, Edward Lasker (many times)" and "drew Capablanca and Alekhine when they were world champions." He was also a formidable opponent at speed chess right up until his death, as both Sloan and our own Steve Stoyko can attest.

His play reminds me a bit of Sammy Reshevsky's, especially in its focus on positional themes. Torre bigrapher Gabriel Velasco notes that (also like Reshevsky), "Kupchik stood barely five feet tall and weighed less than 115 pounds, and the assertiveness of his personality was in proportion to his size" and that "In keeping with his personality, his style was thoroughly defensive and non-aggressive: he would erect a staunch bulwark and invite his opponent to dash himself to bits against it (which many did)."

In his games against World Champion Capablanca and U.S. Champion Marshall, which I have annotated today (see links below), Kupchik exercised his natural caution, waiting for his opponents to act, and the strategy nearly succeeded against Marshall who was well known for "dashing himself to bits" against his opponent's defenses (that is, of course, when they failed to collapse). The game Kupchik lost to Capablanca was arguably among the finest and most deeply conceived of the tournament.

Kupchik's performance at Lake Hopatcong 1926 was arguably the best of his career. Though some have suggested that he was lucky to get draws against Maroczy and Lasker in pawn-down positions and therefore may not have been the most deserving of second prize, I would suggest that those draws are simply more proof of his fighting spirit and power at the board. You can play over the games above and judge for yourself.
Posted by Michael Goeller at 9:36 AM