The New Jersey Knockouts kicked off their 2007 US Chess League season with a tie (2-2) against the Queens pioneers. I have posted the games online with some notes.

All of the games were hard fought, but I especially admired IM Eli Vovsha's nice win over FM Tommy Bartell on Board 2 which featured a stunning Knight sac to reach a better ending (though it could have been much worse if Tommy hadn't reacted well). Evan Ju nearly lost on bottom board to an Expert by pressing too hard as Black in the Exchange French, but he managed to create an interesting fortress position to secure the draw. The GM game on Board 1 was a real heavyweight wrestling match that could have gone either way until Benjamin managed to win the Exchange by an artful bit of maneuvering and tactics.

All in all, considering the obvious strength of the opposition, a draw was not a bad result. Next match September 5: Black vs Tennessee Tempo (8:00 ET).

Continuing my re-analysis of the Urusov Gambit, I present a refutation of the unusual line 1.e4 e5 2.Bc4 Nf6 3.d4 Nxe4 4.dxe5 Qh4, which received some positive press following its use in the USSR championship of 1974. White has to be careful here; Black threatens mate, after all, and the natural 5.Qe2? is met by 5...Nxf2! But there are two ways for White to gain a clear advantage.
I counted up about 40 lines from my Urusov Gambit site that will eventually receive reconsideration (with the help of Max Burkett). With this second entry, I figure we're 5% finished. What form the final analysis will take (whether website, book, or CD) is yet to be determined.
Posted by Michael Goeller at 7:24 AM 1 comment:

The Traxler Counter Gambit (a.k.a. the Wilkes-Barre Variation, due to Ken Williams's 1979 pamphlet based on games and analysis from his chess club in that Pennsylvania town) seems rather insane to the uninitiated: 1.e4 e5 2.Nf3 Nc6 3.Bc4 Nf6 4.Ng5 Bc5!? Like a lot of gambits, you have to see some games and try yourself to refute it before you will have any faith. Some recent online articles renewed my interest in the line and restored my faith that it would likely be worth some study, if I could find a spare month or so to do the analysis. NM Dan Heisman's CD (mentioned below) is highly recommended for the serious.
Videos (new)

Posted by Michael Goeller at 3:23 AM 5 comments:

Helen Margaret Wojcio of Kenilworth, NJ, passed away Sunday, August 19, and is to be buried today at 9:15 a.m. in the Opacity Funeral Home, 511 Washington St., Kenilworth. Mother to Kenilworth Chess Club historian, founding member, and former long-time president Michael David Wojcio, Helen was a wonderful lady. She is survived by her husband, Michael Peter Wojcio, the oldest living resident of Kenilworth (and Grand Marshall of the Kenilworth Centennial Parade); her three children; five grandchildren; and two great grand children. In lieu of flowers, donations may be made to the Kenilworth First Aid Squad, 491 Washington Ave., Kenilworth, N.J. 07033.
Posted by Michael Goeller at 8:08 AM No comments:

Malakhov - Zvjaginsev
I listened to John Watson's excellent ICC radio show last night, where he gave a favorable review to Jan Timman's On the Attack, a collection of great attacking games. The first game that he examined was Cifuentes-Parada--Zvjaginsev, Wijk aan Zee 1995, which is a beautiful game, featuring both a queen sac and a king hunt. I recognized Vadim Zvjaginsev as the originator of the controversial opening 1.e4 c5 2.Na3!? but was unfamiliar with him as a player, so I naturally checked out his games at Chessgames.com. Some of his best have been collected there in a piece titled "Z is for Zvjaginsev." More puzzles from his games can be found at Chess Puzzles by GMs. If you solve the ones above, I think you'll want to learn more about this Russian GM born August 18, 1976.
Posted by Michael Goeller at 8:57 AM 1 comment:

I have seen a number of statements online to the effect that 1.e4 e5 2.Bc4 Nf6 3.d4 exd4 4.Nf3 Nxe4 5.Qxd4 Qe7?! is the "refutation of the Urusov." Of course, there's really no hope for such a silly looking move, even if it can be a little tricky. After winning a game against it on ICC (where my opponent seemed to play the move quite deliberately), I set about analyzing it a bit and present to you "Refuting 5...Qe7." Special thanks to Max Burkett for his feedback on my analysis here.
I have set about slowly re-analyzing my Urusov material and hope to present a number of pieces in coming weeks and months.
Posted by Michael Goeller at 6:24 AM 1 comment: 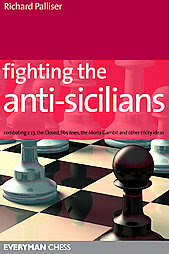 Anyone below master who plays the Sicilian Defense will tell you that it's practically a waste of time to prepare a "main line" after 1.e4 c5 2.Nf3 and 3.d4 since all of their opponents are playing anti-Sicilian--the c3-Sicilian and Grand Prix Attack being the most popular. There have been a number of books for Black against these systems, including those by Gallagher and Rogozenko, but they don't measure up to English IM Richard Palliser's recent and absolutely excellent Fighting the Anti-Sicilians (Everyman 2007).

For one thing, I've seen very few books that have such a coherent and straightforward system built around an early ...d5 break, often supported by ...e6 and ...a6, which has always struck me on the White side as Black's most effective equalizing method, especially against the Grand Prix and Bb5 lines. In his book Meeting 1.e4, Alexander Raetsky offers some advice along these lines, but with nowhere near the depth and breadth that Palliser achieves.

In fact, I've rarely seen such breadth and depth in a repertoire book. Palliser often offers several choices (especially by transposition) against most lines. But it is his depth of analysis that I found most impressive, especially where I have already examined the variations closely on my own. That was especially true of a line I have written about that can arise by 1. e4 c5 2. Nc3 e6 3. Nge2 (I prefer 3.Nf3, but it's about the same in the end) 3...a6 4. d4 cxd4 5. Nxd4 b5 6. g3 Bb7 7. Bg2 Nf6 8. O-O!? (see Guseinov's Anti-Paulsen Gambit). I have never seen this covered in an opening book, even though it is actually quite a popular system, especially on ICC. Palliser's book, combined with my own ICC research, has made me recognize that Black is doing quite well here, as I present in Guseinov's Gambit Refuted? where I look at the line that Palliser correctly considers most critical: 8....b4! 9.Na4 Bxe4 9.Bxe4 Nxe4 10.Re1 Nc5! -- after which White has little compensation for his missing pawn and potentially weakened castle position.

The other chapters are also quite strong and worth summing up:
It's rather surprising to think about how dominant the Black kingside fianchetto has become as a way of combatting the anti-Sicilians, especially considering the fact that it is hardly a dominant mode of handling the Sicilian generally (despite the occasional popularity of the Dragon). The ...e6 lines with a quick French set-up that Palliser offers are very effective and easy to learn, even for lower-rated players. I only wish Palliser offered more ...e6 lines rather than giving the occasional kingside fianchetto for Black. But that criticism aside, I think he has done a great service to the Sicilian and the book deserves a wide audience.

It is also likely to get me playing 1...c5 again....especially now that I know that Guseinov's Gambit Is Refuted.
Posted by Michael Goeller at 1:54 PM 17 comments: 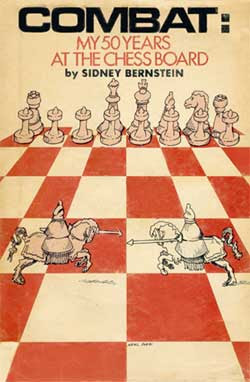 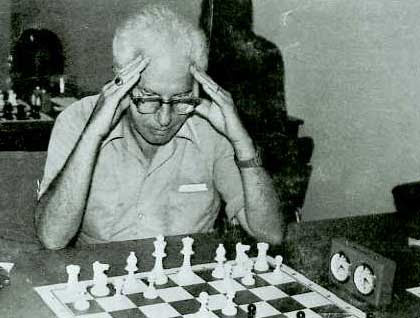 Looking through the games from the recently concluded U.S. Open in Cherry Hill, NJ, I was interested in the miniature IM Enrico Sevillano - Pete Tamburro, which seemed theoretically significant. Very likely, Pete will be seeing that game in future opening manuals--to his chagrin!

Like many players who enjoy studying openings (as Pete "Openings for Amateurs" Tamburro obviously does also), I've collected a fair number of off-beat lines that I like to trot out from time to time. One of my "surprise" weapons against the Scotch has been 1.e4 e5 2.Nf3 Nc6 3.d4 exd4 4.Nxd4 Nf6 5.Nc3 Nxe4(?), which I've actually had quite a bit of success with over the years in blitz and off-hand games. I especially like to see the look of surprise on my opponent's face when I snatch his e-pawn and leave my Knight en prise. Bewildered expressions, many minutes on the clock, and eventual loss surely follow for him. I imagine Pete keeps that tricky line in his repertoire for the same reason, knowing that there is only one line that the books consider of any advantage for White -- and that line is nowhere near being a "refutation." Well, I think we are both going to shelve 5...Nxe4? following IM Sevillano's brilliant performance, which demonstrates the correct refutation -- a line that most books incorrectly consider inferior for White or equal at best. Playing through Pete's 18-move loss to Sevillano, I see why so many titled players simply ignore the books and make their own theory....
Posted by Michael Goeller at 9:59 AM 6 comments:

What with vacations, moving to a new job, doing a number of long-delayed home improvement projects, and taking on a number of other tasks (including web development), it has been hard to find time to blog in any meaningful way. But I've managed to put together a few files of late, so I think I may be posting again.... Stay tuned.
Posted by Michael Goeller at 9:53 AM 1 comment: