While I was in Michigan recently, I had the chance to meet Tim McGrew, who is probably best known to chessplayers as the author of "The Gambit Cartel" series at ChessCafe. In the world of academia, which he also inhabits, Tim is better known as "Dr. McGrew" and Chair of the Philosophy Department at Western Michigan University. Though his University duties have kept him from writing as regularly about chess as he used to, he still does occasional analysis for West Michigan Chess and remains active as a chess player and teacher. As a player, he recently tied for first in the Michigan Open and therefore can claim a portion of his state title. As a teacher, he can be found every week at the Portage Library giving lessons and advice to over a dozen young students of the game, including his two daughters. 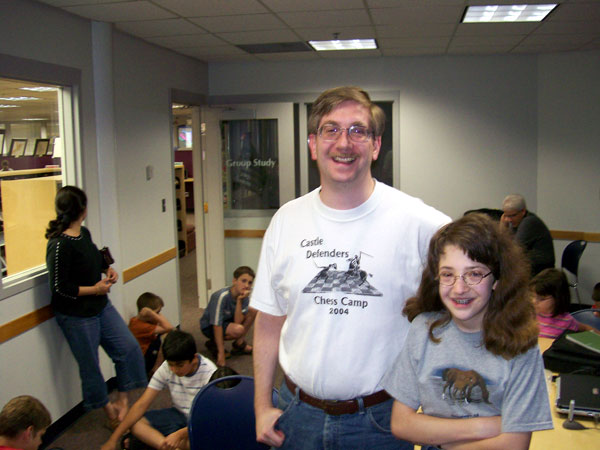 Tim and daughter Bethel at the Portage Library
Tim was kind enough to annotate his games from the Michigan Championship for our website. As with the games of young Evan Ju, who claimed the New Jersey title this past year, they demonstrate that it takes a rare combination of skill, stamina, and good fortune to take home a state championship.

I got proof of what a good teacher Tim is when I played a few skittles games against his daughter Bethel, who is a very strong 1600-player, as she proved by nicking me for one game out of two. Tim is nearing master at 2168 USCF but sports an ICC blitz rating of 2705, so I was not too surprised to lose both of our games (the first of which I have also annotated at the link above).

I asked Tim what he thought were some of the advantages chess offered to kids, and he quickly rattled off a whole list of things:
I told him I also thought that chess could get kids interested in reading. He thought that might be possible, but he suggested that his own experience was that you have to be a reader before you will read about chess. He says that he grew up as a "library hound." He learned chess from his father and figured out pretty quickly that the only way he would eventually be able to beat him was by studying the game and reading books. He got out books on Capablanca, Rubinstein, and Alekhine and would play through one game from each every day. Without already being a disciplined reader, it might have been hard for him to institute and carry out such an intensive study plan.

He remembers studying those games, "while Tchaikovsky played in the background" so that, to this day, he associates certain games and positions with particular musical passages. "Swan Lake makes me think of Rubinstein's Rook and Pawn endings," he said. The connection between chess and music is well known, and it is interesting that Tim plays the piano, though he says he only does it "when no one is listening who might be permanently harmed by the experience."

I have long identified with Tim as a chess writer. We are both academics, both enjoy gambit lines, and both retain an amateur status in the chess world. It therefore should not have surprised me that he was influenced by some of the players who figure so importantly in the history of the Kenilworth Chess Club.

Chatting on ICC, Tim told me the following story: "Believe it or not, I played Steve Stoyko once when I was a kid. I was rated 1300 or so; he was 2305. He crushed me in about a dozen moves. (I've gotten revenge recently against him online, though.) This was the late 1970's, in a little tournament called the March of Dimes Open. I beat an A player in round 1 and got Stoyko in round 2. I had never had a chance to play the Schliemann Defense before, but I decided to try it out. Of course, I got out-computed and crushed. I hadn't really expected to win, so I wasn't devastated, but I did feel that my opening had not held up well. I wandered out of the playing room and into the lobby, where an old guy was sitting quietly. I don't know why I went up to speak to him -- maybe he just looked in my direction. Anyway, we fell to talking about my game, and I told him of my woes, how this was the first Schliemann of my life, and I had lost it like a beginner, and I thought perhaps I needed to get a different defense. Stoyko himself had said, laconically (though not unkindly), 'Get something sound.' But the old guy held my eye and said, 'No, don't give it up, play it again.' So I did. For the remainder of my active tournament career until I stopped playing in college, I used the Schliemann every chance I got. I never lost another game with it, and I conceded only one draw. It was only years later that something clicked and I realized that the old guy had been Edgar McCormick."

As Tim knows, Edgar was my chess mentor growing up. It would be very much like him to urge Tim to keep playing the Schliemann. Edgar played lots of gambit lines, and was the reason I play the Albin Counter-Gambit (which Tim plays too, of course). I also find it very ironic that his story pits Stoyko's statement to "Get something sound" against Edgar's embrace of gambits, since in some ways I am perched myself between the advice of these same mentors, wondering if I should try to create a repertoire that is less focused around gambit lines or just embrace the openings I enjoy.

It was this same theme that I had identified with so much in Tim's pieces for ChessCafe, especially in the three he refers to now as "The Peter Stories": A Little Learning, The Power of Ideas (my favorite), and Master Class. In all of them, Peter struggles within himself to justify his choice of a gambit repertoire, often against external voices telling him to "play something sound."

The Peter Stories are a good illustration of how Tim's work as a philosopher connects with his chess writings, since they illustrate his view that we arrive at knowledge through "internalist foundationalism"; that is, our beliefs are based on a conscious choice that we arrive at through reasoning from basic premises. Ultimately, we are not convinced by outside influences alone but by our own examination and analysis of the evidence. And the evidence is pretty good for gambits, looked at from the right perspective.

As Tim argues, we should not judge the strength of a gambit by any "objective" measure of its quality, as played by a computer (with computer accuracy), but by the effects it has on human players left to their own devices in over the board or online play. He even suggests we try to quantify the number of difficult problems an opening sets for one's opponent as a factor in judging its quality. If a gambit line has a hundred pitfalls and only one or two true ways to advantage for one's adversary, that may be a better opening than a safer line that offers one's opponent numerous paths to reasonable play. If you play a line that gives your opponent lots of ways to self-destruct, he very likely will do so...
Gambits are a great training ground for learning to think on your feet and make the most of what you have. In a number of his ChessCafe articles, Tim explores how you can turn your material-dropping mistakes into gambits by just adopting the right attitude. You need to convince yourself that your gambit is sound before you can hope to turn your belief into fact over the board.

I hope you enjoy Tim's writings as much as I do. And I hope I have other opportunities to talk with "Dr. McGrew," who has made me much happier about my own embrace of gambit play.


There are also several pieces (mostly featuring deep annotations of classic games with gambit openings) published at 1001knights.com not currently accessible via the Internet Archive: The Electronic Campfire #1, #2, #3, #4, #5, #6, #7.
Posted by Michael Goeller at 3:14 PM

Great stories, great games and articles, great post! I had read some of the Gambit Cartel articles here and there, but it's fun to see the man behind them.

Hey Michael, I thought you might want to know...Emilio Cordova appears to be doing well!

He is playing in the 4th Annual Continental Chess Championship in Cali Columbia where he is currently tied for first (5.5/7). Yesterday he defeated GM Gurevich and today he plays GM Ivanov.

Does this now qualify him for his 3rd and final GM norm?

I'm not sure you remember me. I'm Victor Rosas 2023 USCF. We played a game once at west orange. Well, the reason i'm writing to you is to joing the Kenilworth C.C i would like to see if there are any possibilities of me participating together with u guys at the amateur team... I've always played board 4 in west orange's strongest teams. Also, I would like more info on ur club. Thank you michael. My email gmvicrosas@aol.com.

Glad I found this- even more reason to really dig into the Gambit Cartel archives :D

this is the very last time that i will miss your post, and delight in your work, which is of the best class.

thank you so much. the best. thank you.

I also notice that the Archived articles I link to are suddenly available from the Web Archives. Happy reading!