I have posted The Steinitz - Sveshnikov Attack, Part Two (download PGN), which revisits the topic of my earlier article on this interesting variation of the Giuoco Piano.  This new installment focuses on the most challenging line Black can play, which is 1.e4 e5 2.Nf3 Nc6 3.Bc4 Bc5 4.c3 Nf6 5.d4 exd4 6.e5 d5 7.Bb5 Ne4 8.cxd4 Bb6! (see diagram).

A recent win by Gawain Jones over David Howell in the 2011 British Championship in Sheffield, England, inspired me to put together my notes on this line, which remains rather complex and double edged.  I have been very impressed by Jones's play of late, especially in the Commonwealth and South Africa Open Tournament earlier this year, where Jones, Nigel Short, and David Smerdon (who finished in the top spots) all had success with the Modern Variation of the Two Knights.  Food for thought for those interested in constructing a Urusov Gambit or Scotch Gambit repertoire with these lines.
Posted by Michael Goeller at 4:37 PM 1 comment:

"The Most Important Novelty of Informant 110" by Josip Asik in Informant 111 and at ChessCafe analyzes the game Topalov - Anand, Nanjing 2010 (discussed here last year), which featured a very interesting novelty in Lasker's Defense to the Queen's Gambit.  It also includes a very thorough treatment of the 12...Be6 line (traditionally called the Cotlar Counter-Attack) in classic Informant style.  There are now enough resources online to develop a GM-level knowledge of the Lasker:

Posted by Michael Goeller at 6:42 AM No comments:


"Alter Ego" is a freaky episode of the television series Ghost Story, which modeled itself after The Twilight Zone, with Sebastian Cabot in the Rod Serling role of host and a focus on  the supernatural.  Broadcast in 1972, this sixth episode clearly intends to capitalize on Fischer's recent triumph in Reykjavik.  The title character is named "Bobby" and naturally plays chess.  Who does he play with?  Himself, of course -- or an evil version of himself who becomes hell bent on taking over his life.  The story-line involving his social studies teacher, Miss Gilden (played by the incomparable Helen Hayes), is every educator's worst nightmare. Dated but mildly diverting, in three 15-minute installments.
Posted by Michael Goeller at 5:01 PM No comments: 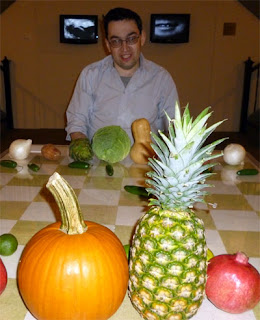 I went to the Fluxus Art Show at the Zimmerli Art Museum today to play some chess.  It was a fun experience and an interesting challenge to play a game using fruits and vegetables in place of pieces.  I played an interesting game against Lev Zilbermintz, which I have reconstructed and annotated.  Though not a lot of chess players showed up, it was a fun event and definitely representative of the Fluxus art philosophy, which often incorporates audience members into a spontaneous performance of art made up of found objects.  It was a very relaxed atmosphere and one of the most fun games I have played in a long time.  Though my opponent got confused by the crazy board and dropped a piece early in the game, he battled as best he could until I was able to put together a deadly mating net (see diagram below).

Posted by Michael Goeller at 11:49 PM No comments: