Kavalek on Anand and the Lasker's Defense 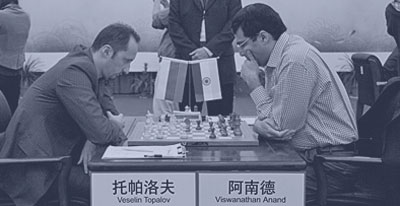 Lubomir Kavalek is my pick to win the CJA's "Best Chess Blogger" award next year for his wonderful articles at The Huffington Post (which appear with even greater speed than his Washington Post columns ever could). His most recent post is "Chess Champion's Class Act" (republished at ChessBase), where he analyzes Anand's impressive victory today in Nanjing, again using the Lasker's Defense to beat Topalov, just as he did in the last game of their World Championship match.  I have written quite a bit on the Lasker's Defense (see my recent "Lasker's Defense to the Queen's Gambit Webliography" for details), and I am especially fascinated by the line that Anand deployed: the nearly forgotten Cotlar Counter-Attack (as documented by Edward Winter in Chess Notes 3581, 3584, 3613 and 6085), about which I have long been planning to write myself.  I may update this post later with additional analysis of this fascinating game that might appear on the web.

"Chess, the Musical" at Mercer 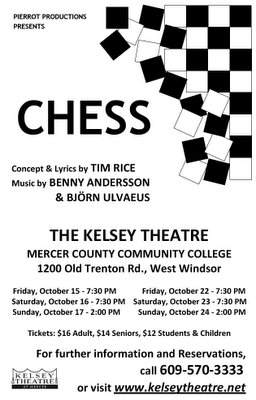 Chess Mates (located at 1531 Irving Street in Rahway, NJ) will have its "Grand Opening" and Open House today from 10-8.  The full schedule of events includes:

Snacks and prizes provided.
Posted by Michael Goeller at 10:31 AM No comments: 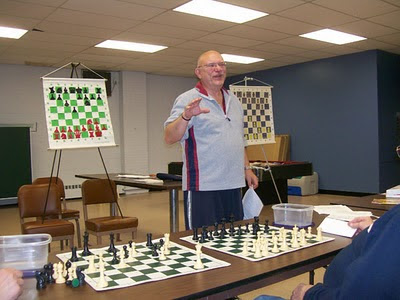 FM Steve Stoyko finished his lecture series on the King's Indian this evening with his fifth and final installment devoted to offbeat White tries and to an Old Indian path to the KID that avoids a lot of theory.  The Old Indian path involves playing 1.d4 Nf6 2.c4 d6!? and meeting 3.Nf3 with the King's Indian continuation 3...g6, and meeting 3.Nc3 (which leaves open the annoying possibility of a future Saemisch f3 or Four Pawns f4) with either 3...e5 (as in Aganalian - Petrosian, Tiflis 1945, analyzed by Chernev in his 62 Most Instructive Games--that part of which you can view online) or 3...Bf5!? transposing to the Janowski Indian and related lines).  In the regular King's Indian section, Steve went over a number of interesting games, including Zita - Bronstein, Prague 1946 (compare Pachman - Bronstein); Stein - Geller, Moscow 1966 (compare Spassky - Fischer 1992); Seirawan - Ivanchuk 1997; and Stoyko - Volovich, NJ Open 2006.
Posted by Michael Goeller at 4:19 AM 5 comments: 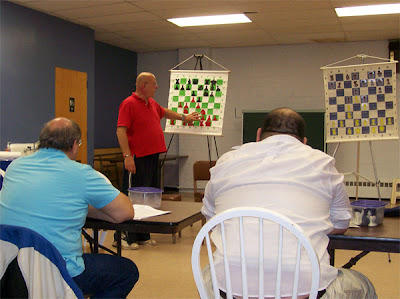 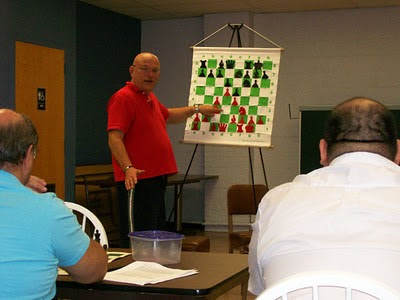 Steve Stoyko discusses the King's Indian.
I finally made it to the club for FM Steve Stoyko's fourth lecture on the King's Indian.  It was absolutely helpful on many levels.  Though I wish my busy work schedule had permitted me to attend the earlier lectures, I think I picked the perfect one to attend.  We started with a review of some main line Mar del Plata lines, including the Bayonet Attack, and then turned to viable White options without Nf3, including the Four Pawns Attack, Saemisch, Hungarian (with Nge2), and Averbach (with Be2 and Bg5).  I have been playing the KID only when White commits to Nf3 to avoid these lines, but after Steve's lecture I feel confident to play it against everything.  Steve's series of lectures concludes next week with the fifth installment on the Saemisch (which he did not finish covering) and off-beat tries (such as Bd3).  I may post some notes on a particular line that interested me.
Posted by Michael Goeller at 1:59 AM No comments: