Jonah Lehrer has written a fascinating post on "The Cognitive Cost of Expertise" (The Frontal Cortex, in Wired's Science Blogs, November 19, 2010) that uses Adrian de Groot's famous work with chess masters as a jumping off point to talk about the cognitive trade-offs of expert knowledge.  Lehrer seems to be making his career by writing about the science of choice and decision making, and I very much enjoyed his book How We Decide .  I have pointed readers previously to his essay "Don't: The Secret of Self-Control" and commented on a piece he wrote on Carlsen's "Chess Intuition."
Posted by Michael Goeller at 9:04 AM 1 comment:

DNAinfo broke a story yesterday ("Chess Players Ticketed by NYPD"), since picked up by The New York Times ("Police! Step Away from the Chess Table"), that late last month New York City police ticketed seven chess players at the Inwood Hill Park for ignoring signs near the chess tables that the area (adjacent to a playground) was "off limits to adults unaccompanied by a minor."  Both articles have drawn numerous comments, my favorite being: "Chess only leads to more violent board games, like Go and Risk."  Obviously, if they want to keep chess players away from children, they should just move the tables a pawn's throw away.  But it does make you wonder why we have gotten so crazed about "protecting the children" that we can't imagine adults going to a playground just to play.  Update: the New York Post made the story front page news under the headline "CHECK MATE" today.

Posted by Michael Goeller at 4:28 AM No comments:

Labels: chess in the news


GM Larry Evans died this week at the age of 78 after complications following a gall bladder operation.    I think his work touched every U.S. player in some way, and we probably all have read something by him over the years.  My favorite Evans book is An Unbeatable Opening Repertoire after 1.e4 e5 2.Nf3, focused on the Four Knights, which is surprisingly durable.  One of his better recent articles was "The Bobby Fischer That We Loved," which appeared in Chess Life and celebrated the positive side of Fischer following his death.  Though Evans is remembered more as a chess journalist than as a player, he certainly had his share of interesting games: favorites include Evans - Pilnick, Marshall CC 1946 (which he considered his best) and Taimanov - Evans, New York 1954 (part of a match in which the young American took down the famous Russian star.)  He will likely be widely eulogized this week as a natural American-born chess talent, and I will post additional links as they appear. 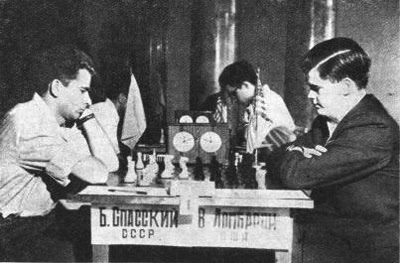 Spassky vs. Lombardy
Eliott Hearst's "Victory at Leningrad: The 50th Anniversary" has been posted in full at the USCF website for all to read (a slightly shorter version of the article appears in this month's Chess Life).  It tells the story of the great American victory at the 7th World Student Team Chess Championship, which represented one of the most important international titles ever won by U.S. players during the long period of Soviet / Russian dominance of the game since WWII.  I posted an article on the event  about four years ago and analyzed  many of the better games (also a subject I returned to later). I was most impressed by the deep games of Charles Kalme, especially those where he played the King's Indian Attack.
Posted by Michael Goeller at 7:45 PM No comments:

IM Dean Ippolito has postponed his attempt at the World Record for a chess simultaneous exhibition until the specific rules required by Guinness can be clarified  (possibly some time in April 2011).  There have been questions raised by Guinness regarding the age and affiliation of the players involved in the most recent records established in Iran and Israel, so Ippolito quite rightly does not want to go ahead until the Guinness criteria for qualified opponents can be clarified.  Watch his website for further news and details.
Posted by Michael Goeller at 10:06 AM 1 comment: