I played a couple of games in the Kenilworth Chess Club's Summer Tournament, which I took the time to annotate for my own benefit and thought I'd share: see Goeller - Kernighan and McAuliffe - Goeller.  Both were played at Game 60 and have some error on both sides.  And both reached complicated tactical positions with lots of possibilities. Looking through these games, I was reminded of how you often have second chances in chess. You just have to be awake to claim them.

In his article "The Bobby Fischer That We Loved" in Chess Life, GM Larry Evans reprints an interview he did with Frank Brady in which he says: "I subscribe to a theory of the second resource. That is, no matter how bad your position, if it’s not totally lost, you will reach a point during the game where you will be presented with an opportunity to win or draw if you take advantage of it."

Nowhere is that "second resource" more common than in amateur games, where you will typically get even a third or fourth resource before the end.  In his book Rapid Chess Improvement, Michael de la Maza suggests using a computer to construct "evaluation graphs" of your games so that you can see where you lost concentration or lost the thread.  I imagine the graphs for most amateur games would show quite a bit of fluctuation.

The diagrams above show three moments from my two games where second or third chances were missed.

In the first diagram, which could have occured in the game had McAuliffe chosen the more natural 14.Qe2 rather than 14.Qc2, White has a hidden resource after my intended 14...Qd7.  Surprisingly, his best move would then be 15.Ng5! and if 15...h6 (which I had intended) then 16.Nde4! leads to advantageous simplifications for White.

The 2008 Kenilworth Summer Tourney (or KST) continues every Thursday until the end of August and it is never too late to join.  Check out The Chess Coroner's blog for continuing coverage and games.  And be awake to your second chances.
Posted by Michael Goeller at 9:00 PM No comments:

Anand on the Indian Origins of Chess 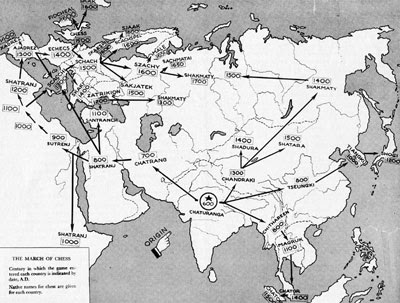 "The March of Chess" from India
In a Time Magazine essay titled "The Indian Defense," reigning world chess champion Viswanathan Anand writes about how the origins of the game helped him to feel entitled to pursue the crown:

In 1991, at my first international tournament, in Reggio Emilia in northern Italy, a Russian grandmaster condescendingly told me I could at best be a coffee-house player because I had not been tutored in the Soviet school of chess, which then dominated the sport. With the arrogance of youth — I was 21 — I thought to myself, "But didn't we Indians invent chess? Why shouldn't I have my own route to the top of the sport?"

It would take me 17 years to find that route, and along the way I've had hundreds of conversations about the origins of chess — with players, fans, officials, taxi drivers, barbers and who knows how many people who sat next to me on a plane.  I've heard the ownership of chess being claimed by Russians, Chinese, Ukrainians, Arabs, Iranians, Turks, Spaniards and Greeks. My own view is that the sport belongs to everybody who plays it, but the question of its origins is easy enough to answer: chess comes from India.

An interesting personal reflection and worth a look.  Hat tip: ChessBase News.
Posted by Michael Goeller at 12:59 PM 3 comments:

I continue my re-analysis of the Urusov Gambit (1.e4 e5 2.Bc4 Nf6 3.d4) with a look at "The Tricky 3...Nxe4 4.dxe5 Line."  The position in the diagram above (with Black to move) is already very tactical.  The Knight is vulnerable at e4, giving White immediate threats, including 5.Qd5 forking f7 and the Knight at e4 and 5.Bxf7+ Kxf7 6.Qd5+ followed by Qxe4 winning a pawn and misplacing Black's King. But Black does have the move, and he has a number of attacking ideas of his own, including the f2-assaults 4...Bc5, 4...Qh4, and 4...Nxf2, none of which is effective against precise play.  Black's best move in the position is probably 4...c6, countering White's Qd5 threats and hoping to expand by 5...d5.  After 5.Qe2 Nc5 White keeps an edge but Black has chances.
Posted by Michael Goeller at 5:19 AM No comments:

One of the most difficult lines to prove a White advantage against in the Urusov Gambit is the surprisingly good 1.e4 e5 2.Bc4 Nf6 3.d4 exd4 4.Nf3 Bb4+. I have posted two recent games that show the typical struggle in that line, which often develops into a rather tactical endgame, with both Kings in the center and potential targets all over the board. Urusov expert Max Burkett (who sent me the second game) likes to call this "the Patzer Variation," after the phrase "patzer sees a check, patzer plays a check." But it may actually come closest to being a "refutation" of the Urusov, in that it probably allows Black to equalize with precise play. Fortunately, the move continues to be favored only by patzers, so Urusov aficionados will not usually have to face the most precise defense.

Posted by Michael Goeller at 9:06 AM No comments:

Waitzkin on the "Multitasking Virus"

I have always thought that one of the values of chess and other games is that they help us practice the art of focused attention. Josh Waitzkin has written about this in his book The Art of Learning (just out in paperback) and returns to the topic in an essay on the "Multitasking Virus in Our Classrooms" which you can read at the USCF site or, better, in its original form in two posts at the Four Hour Workweek blog: "Multitasking and the End of Learning? -- Part One" and "Part Two" -- which include lots of interesting discussion and commentary from readers and blog-master Tim Ferris (author of The 4-Hour Workweek, which is on my summer reading list.)
Posted by Michael Goeller at 10:18 AM 2 comments: