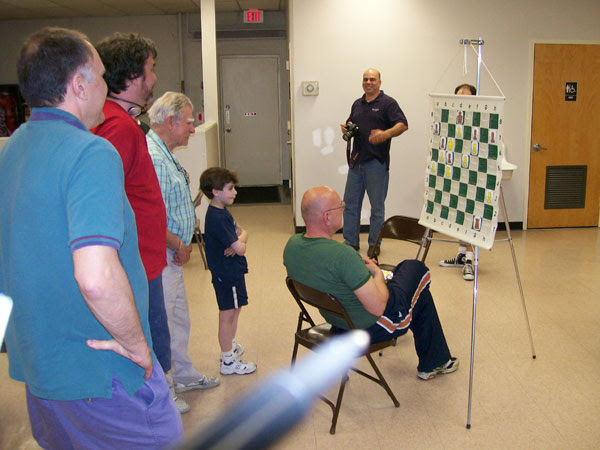 White Team, led by Steve Stoyko
(seated) -- with a pen in the frame.
Over 20 players participated in The Kenilworth Chess Club's annual consultation game, played over two sessions with teams in different rooms led by master players, which ended in victory for the White team, led by club champion Steve Stoyko. I have posted the complete score online, with some notes on the critical moves of the second half. In an earlier post, I had more extensive notes on the opening stages of the game (see "Consultation Game - Part One").

The game is also discussed by The Chess Coroner, John Moldovan, who was appropriately on the Black team (to match his blog's background): 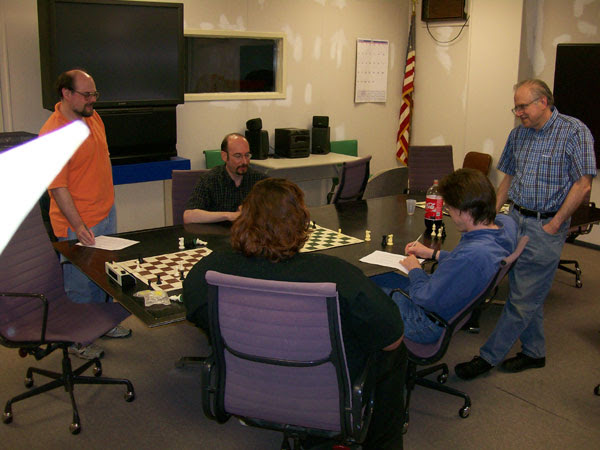 Black Team, led by Mark Kernighan (seated,
writing) -- with another pen in the frame!
Posted by Michael Goeller at 4:46 AM

Hi. Chess novice here. Just started. I like your blog quite a bit and I hope the chess club in Seattle is half as active as yours. I have decided to keep track of every game I play as i learn and get better so that some day I can go back and be able to more easily see my own mistakes. Inspired by your own fine blog, I decided to do it online for everyone to see!! If you are interested you can link to it. it is chessingthesun.blogspot.com

Anywho... thanks for maintaining such a nice chess blog. Trust me: us beginners need all the help we can get!

I am in Seattle too. Where do you meet to play?

hyrum... I do not live in Seattle yet but by July I will. I was thinking I'd just track down a chess club or something. What are the good spots for beginners in Seattle?

Hyrum -- Maybe you can write up "A Chess Tourist's Guide to Seattle"?
Michael

I have never actually belonged to a chess club, but in the past, I have just gone to the downtown Seattle public library on the weekends, and there were always people there willing to play. It's been awhile, though, since I went. Been too busy :(

Thanks for the tip hyrum. I also understand there is a park on capitol hill that hosts impromptu games on mondays.

I am not very good at writing, after I saw this very good website, I became excited to write smarter.

a very useful website, very good to always remember and must be taken care of thanks for the information.