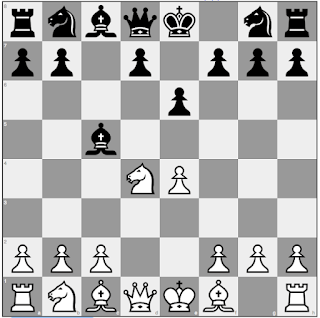 Marc Lacrosse sent me a link to his new site devoted to the Basman-Sale Sicilian (1.e4 c5 2.Nf3 e6 3.d4 cxd4 4.Nxd4 Bc5!?) I have always been a fan of opening analysis websites and this one is pretty good. It even offers some nice zipped PGN files of games with the line. All free, so you can't go wrong.

There was a book by Valeri Bronznik titled Sizilianisch für Mussiggänger (roughly translated as "Sicilian for the Idler," Kania 2004), which received a favorable review from John Watson (archived at the Wayback) and an article by Srdjan Sale himself titled "Breaking the Fritz Bind" in New in Chess Yearbook #73 (2004). So it is a currently interesting line, worth a look even if you only play these things from the White side....

PS (2015) -- An updated and translated version of Boznik's "Lazy Man's Sicilian" has recently been released by New in Chess.  Also at Amazon for cheap.
Posted by Michael Goeller at 3:00 PM

Labels: check it out, opening analysis

You can find this site archived at:
https://web.archive.org/web/20090202083100/http://users.skynet.be/mlcc/chessbazaar/basmansale/index.html