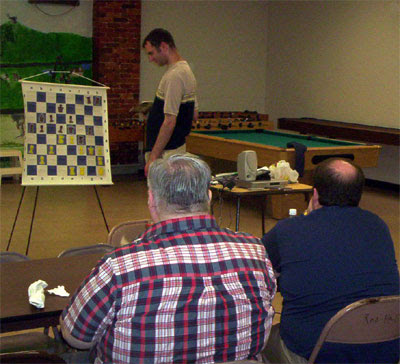 Ari Minkov lecturing on Chess and Music
Ari Minkov gave a lecture last Thursday at the Kenilworth Chess Club on "Music and Chess" (which is the subject of an excellent online bibliography by John Greschak). His talk raised more questions than it answered, including what the relationship might be between musical Romanticism and the so-called "romantic" style of chess play (a question raised quite eloquently by Scott Massey during the talk). In the end, though, I don't think it is so easy to discuss "the musical elements of a chess game" except by stretching analogies, by which practically all the arts (including chess) could be said to be similar. Among the games that Ari looked at was that of Captain Smith vs. Philidor (London 1790), where Philidor's theories of pawn play are very much on display -- though the final combination (see diagram below) is conducted by the pieces. Philidor, as is well known, was a violinist and composer of the late 18th Century as well as one of the first chess writers of note. Is there a way of interpreting his game as illustrative of both musical and chess romanticism? Or of displaying some musical ideas? I have no answer, but perhaps the reader can supply one....

Smith-Philidor
Black to play.
Posted by Michael Goeller at 10:46 AM

Top ringtone installed in 2018
Hello friends.
What are you waiting for? Quickly install your favorite ringtone for your mobile phone. There are many ringtones created from famous songs and quality. Latest ringtone. Ringtone of the day. I will introduce you the hottest ringtone in 2018 below:

You can also refer to tamil music here: - Tamil ringtone

I need your opinion, to improve the ringtone better. You can create your own favorite ringtone at my site by following the instructions here: https://ringtonedownload.in/

I just couldn't leave your website before telling you that I truly enjoyed the top quality info you present to your visitors? Will be back again frequently to check up on new posts. Go with our site webstagram to read nice blogs as yours on instagram.

I read this article, it is really informative one. Your way of writing and making things clear is very impressive. Thanking you for such an informative article. online experimental music artists