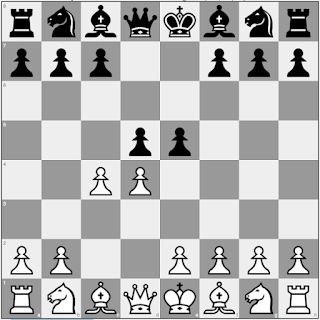 When Topalov played 1.d4 against Morozevich in the FIDE World Chess Championship the other day, I fully expected (as perhaps did he) 1...d5 with a chance to see Moro's favorite Albin Counter Gambit, an opening he has almost single-handedly helped to revive. Instead we got an equally interesting QGD with Bf4, which perhaps Steve Stoyko will discuss at one of his lectures.

In the faint hope that we might see an historic Albin game, I had put together a short (and necessarily incomplete) bibliography on the Albin with notes directed toward Morozevich's favorite variation with ...Nge7. Though no Albin transpired, I will still share it here.

I was introduced to the Albin by Edgar McCormick (acquaintance of Weaver Adams) in the early 80's and have been following theory there for two decades now. For the past two years I have even looked rather closely at the ...Nge7 lines, though I have only played them in 5-minute (and mostly against NM Mark Kernighan!) I have decided to give up the Albin pretty much, so I am tempted to put my analysis up on the web and may do so in the coming weeks.

The Albin Counter Gambit (1.d4 d5 2.c4 e5!?) has been played and written about since it was first popularized by Adolf Albin in the 1890s, so I'm sure there is a lot more literature out there (especially from its turn-of-the-last-century heyday) than I represent below. Recent use of the countergambit by GMs Morozevich and Nakamura has revived interest and has led to more recent publications. During the early years of the gambit, White players tried a number of ideas (including holding the pawn with f4--an idea that Spassky revived in the 60's), until they hit upon the King's Bishop fianchetto with 3.dxe5 d4 4.Nf3 Nc6 5.g3, which remains a popular approach. Black usually responds then 5...Bg4, 5...Be6, or (most interestingly) 5...Bf5!? -- but recent attention has focused on Morozevich's 5...Nge7!? (a move first used by Frank James Marshall and then by Ariel Mengarini).

More recently, 5.Nbd2! has been widely recomended (e.g.: by Eric Schiller and Angus Dunnington) as the easiest anti-Albin line, but few sources discuss the Morozevich and Nakamura response of 5...Nge7, which may now be one of the most important theoretical lines for the evaluation of the Albin as a whole. Those that do discuss this line at all give 6.Nb3 Nf5 7.e4 dxe3 8.Qxd8+ Nxd8 (8...Kxd8 9.Bxe3! Nxe3 10.fxe3 += Bilguer!) 9.fxe3 += with an endgame edge for White as proven in several games. Yet no GM has tried this widely accepted "refutation" against Morozevich or Nakamura! One can only guess that they assume the two are fully computer-prepped, and that the doubled e-pawns on an open file are a significant long-term weakness. My own analysis of these lines is far from conclusive and I bet that if Moro had risked the Albin against Topa we would have seen this line! But that was all wishful thinking....

Articles from The Kenilworthian
I have written a number of pieces on the Albin was posted soon after this:


Johannes Fischer, Adolf Albin: Nothing wrong with a gambit (ChessBase 2018).
An attractive historical introduction to the Albin, with pictures, games, and discussion.

Luc Henris, The Complete Albin-Counter-Gambit (2013)
The most complete book on the Albin ever written.  Table of contents online.  A must have for any serious student and an incredible achievement.  The book offers an excellent historical introduction, strategic discussion, thorough analysis, complete bibliography, and excellent indexes. 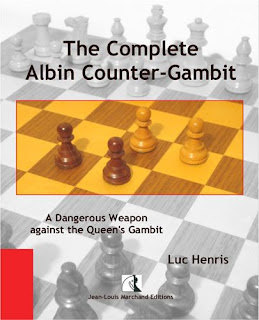 Jose Lopez Senra, "The Albin Resurrected."  New in Chess Yearbook #105 (2012): 17.
Analyzes the line with 5.a3! that appeared in Topalov - Morozevich, Monaco rapid 2005, and in Popov - Potapov, Rijeka Ech 2010, offering the improvement 18...Be7! with deep analysis suggesting equality with best play by both sides.

Alexander Raetsky and Maxim Chetverik,  No Passion for Chess Fashion.  "The Albin Countergambit" (Mongoose 2011): 149-194.
Offers a good survey of the Albin, covering all critical lines in 20 games.  See my review.

Nigel Davies, Gambiteer II (2007).
Offers good material on the Albin with Nge7 and the Chigorin to help complete a repertoire for Black.

Susan Polgar, "The Albin Counter-Gambit" Chess Life (February 2005)
A useful little article that inspired Nakamura to play the 5...Nge7 line against her (see links below).

Jeroen Bosch, "Morozevich’s Pet Line in the Albin" Secrets of Opening Surprises 2 (New in Chess 2004)
I actually have not seen this article, though I will likely be getting hold of it soon, especially if I decide to present my analysis. I imagine it is the most important piece on the Albin in recent years.

Alexander Raetsky and Maxim Chetverik, "A 'Suspect Variation' in a Suspect Counter-Gambit." New in Chess Yearbook 71 (2004): 155-159
Explores Morozevich's 5.g3 Nge7, which had been tried previously by co-author Cheterik with success and has a longer pedigree than is widely realized (including games by Ariel Mengarini they do not mention).

Luc Henris, Albin Counterambit / Albins Gegengambit (ChessBase CD 2003)
This is likely the most important current Albin resource, with many games and excellent text files. The Albin, though, is still very much open territory in many lines and there is little theoretical concensus. Henris thinks 5.Nbd2 Bf5!? is best.

John van der Weil and Erik Hoeksma, "Still Suspect" New in Chess Yearbook 62 (2002): 129-136.
Uses Chris Ward's book (see below) and the games from the Groningen Theme Tournament (see links below) as a focus for discussing the latest theory on the Albin.

Angus Dunnington, Attacking with 1.d4 (Everyman 2001)
In a rather short but influential chapter on the Albin, Dunnington recommends 1.d4 d5 2.c4 e5 3.dxe5 d4 4.Nf3 Nc6 5.Nbd2! Interestingly, he does not even mention Morozevich and Nakamura's response of 5....Nge7. But his analysis of other lines does suggest why 5....Nge7 has become the standard Black response: the rest give Black only trouble!

Alexander Raetzki and Maxim Tschetwerik, Albins Gegengambit (Kania 1998)
Written in Informant-style notation by Raetsky and Chetverik, this book is quite useful for those studying the line. The same pair that wrote the article below (and many other books and articles), but with a different spelling....

Ariel Mengarini, Predicament in Two Dimensions: The Thinking of a Chess Player (Thinker's Press 1979)
Mengarini discusses the game Dunning-Mengarini, Mass. 1979, where he takes credit for playing and analyzing lines featuring 5...Nge7. I wonder if J. S. Hilbert (who inherited Mengarini's unpublished game scores) can confirm that?

The X-Rated Albin by Andrew Martin
A good fun article on the vulgar caveman way to play the Albin against 5.g3 by simply going straight for the standard attack with Be6 (or f5 or g4), Qd7, O-O-O, Bh3, and h5-h4.

Adolf Albin and the Genesis of the Albin Counter Gambit, Part One and Pat Two, by Olimpiu G. Urcan
Despite the title's promise, these articles are more about Albin and his contributions to chess than about his (or was it really someone else's?) famous opening concept. But there is enough of a historical survey of the gambit to make these articles worth reading.

Albins Gegengambit
An excellent piece of analysis and a complete statistical survey of the opening from Scid.

How to Meet the Albin by Eric Schiller (updated link)
This piece on the 5.Nbd2 line has vanished from the web but can be found in the Internet Archive.  It is worth reading.

A Fistful of Novelties by Tim McGrew
Includes an interesting novelty in an Albin sideline with 5.Bf4 Nge7.

A Marvelous Combination of the XX Century by Boris Schipkov
A very well-annotaed game, though one with a White bias.

Checkpoint #58 by Karsten Hansen
Includes a review of and excerpt from Luc Henris's excellent Albin CD.

Kokesh-Hammer 1997 annotated by Kokesh
An interesting game by two experts.

Albin Countergambit
A mystery personal site with insufficient information. Includes games from other openings without explanation.

Albin CounterGambit Thematic Email Tournament
Sponsored by CCN, 2002
A collection of games from the theme tournament, some of which reveal interesting ideas.


Posted by Michael Goeller at 6:52 AM

re: the "mystery site" that is linked to here -
http://members.tripod.com/HSK_Chess/albin.html

the annotations were taken from a Minic article from an old issue of "Inside Chess".

Don't forget the use of Albin Counter-Gambit in a Nero Wolfe mystery...

...Gambit also has one of the neatest plot twists in a mystery I've ever read.

There was also a very good article by Joe Shipman in the May-June 1989 issue of Chess Horizons. It was this issue that got me playing the Albin.

Thanks. I will have to go to the Wayback Machine and change the links, as most of them no longer work. But you can find that through wayback -- like the Urcan article:
https://web.archive.org/web/20110604165055/http://www.chesscafe.com/text/skittles239.pdf