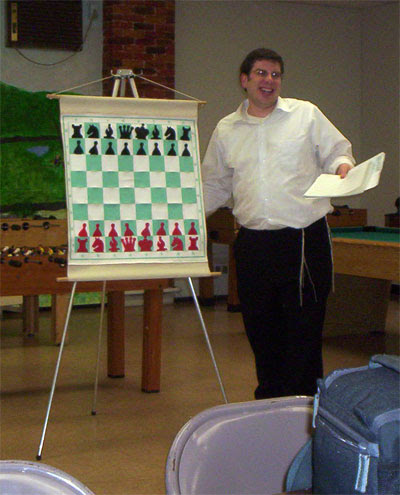 Yaacov Norowitz lecturing on the Stonewall. 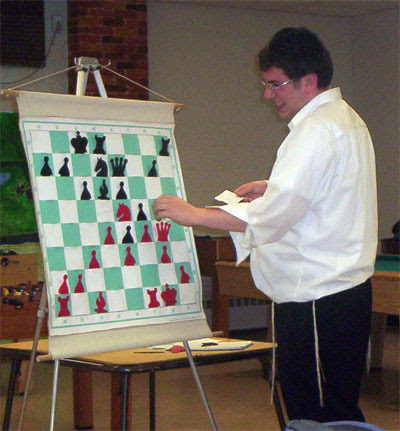 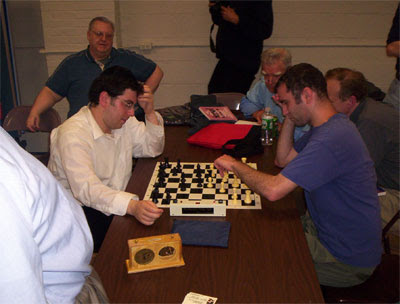 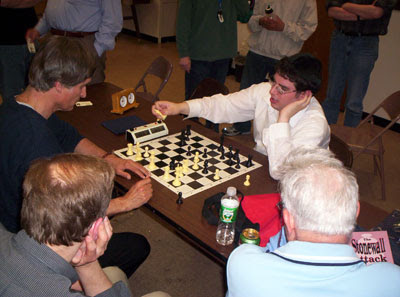 NM Yaacov Norowitz, who sports a Super-GM blitz rating of 3280 on ICC (where he has the handle "YaacovN"), gave a wonderful lecture last night on his favorite Stonewall Attack to a captivated audience of over 20 at the Kenilworth Chess Club. His lecture focused on the critical lines of the Stonewall system (where White tries to set up his pawns in "wave" fashion at c3, d4, e3, and f4), the middle-game theme of dark / light square control, and the relative value of Bishop vs. Knight. After the lecture, he entertained the crowd by taking on several club members in succession at time odds of 5-to-1, winning every game handily, even against master opponents.

It was a pleasure for our older members to welcome back Yaacov to the club, where he had been a member during his youth (even winning the under-1800 championship in 1992-1993). Now engaged in rabbinical studies, Yaacov gives online and private lessons, simultaneous exhibitions, and entertains at chess "parties & simchas" according to his card. You can contact him at ChessRebbi@hotmail.com. I can definitely say he is an excellent lecturer.

I will be posting a detailed analysis of the Stonewall games he discussed, which included one of his ICC victories over World Champion Topalov ("EttoreMajorana"). I think you will be very impressed by the games.
Posted by Michael Goeller at 2:33 PM