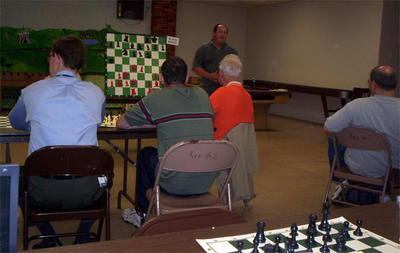 Scott Massey lecturing on Moscow 1925
NM Scott Massey delivered his lecture on the famous Moscow 1925 tournament and the beginnings of Soviet Chess last night to over a dozen interested members of the Kenilworth Chess Club. As always, his lecture was very well researched and demonstrated several fascinating games. Most of our attention was focused on the games of Ilyin Zhenevsky (or Genevsky) who figured very prominently in the history of Soviet Chess as one of the chief organizers of government funds for chess education, GM support, and tournaments. His games in the event, especially against Lasker and Capablanca, were also very interesting and quite suggestive of the coming Soviet era's approach to the game.
Scott's implicit thesis was that the Soviet School of Chess that developed before and after WWII got its most important principles from the best Western players of the time via the series of Moscow tournaments, beginning with Moscow 1925. Basically, the Soviet School of Chess was not fully a native creation but derived from the West. It's actually a rather convincing idea once you look closely at the games themselves. After all, it was Lasker, Capablanca, Torre, and Reti who most played like members of the Soviet School of Chess at the tournament! It took the Soviets themselves over a decade to catch up.
As always, Scott also used the opportunity to reflect on the history and society. Some of his discussion of the emergent Soviet chess system was inspired by Daniel Johnson's "Cold War Chess" (originally in Prospect). He also read a large number of other books, including the following:
Efim Bogoljubow, Das Internationale Schachturnier Moskau 1925 (Olms 1982)
A. Ilyin Genevsky, Notes of a Soviet Master (Caissa 1986)
A. Kotov and M. Yudovich, The Soviet School of Chess (Foreign Languages Publishing House, Moscow 1958)
Andrew Soltis, Soviet Chess 1917-1991 (McFarland 2000)
Edward Winter, "Analytical Disaccord" in King, Commoners, and Knaves: Further Chess Explorations (Russell Enterprises 1999)
Alexander Khalifman, Emanuel Lasker II Games 1904-1940 (Chess Stars 1998)
J. Hannak, Emanuel Lasker: The Life of a Chess Master (Dover 1959)
Gabriel Velasco, The Life and Games of Carlos Torre (Russell Enterprises 2000)
Alexander Cockburn, "Proletarian, Socalist Chess" in Idle Passion (Simon & Schuster 1974)
You can view the lecture online or download it in a PGN file.
Posted by Michael Goeller at 4:51 PM