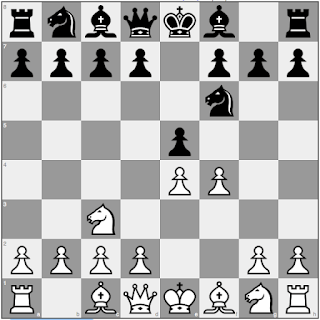 I have decided to return to my project on the Alrick Man Vienna Gambit Theme Tournament of 1924-1925, so I thought I'd compile a bibliography on the Vienna Gambit (C29), which opens 1.e4 e5 2.Nc3 Nf6 3.f4 and usually continues 3...d5 4.fxe5 Nxe4 when White then has a choice among 5.d3, 5.Qf3 and 5.Nf3.  Part of my inspiration for returning to the Alrick Man project comes from an article in New in Chess Yearbook #110 (2014), which presents the Vienna Gambit as an interesting territory in which to "just play chess" in creative ways, as in the game Jobava - Mamedyarov, Warsaw 2013.  This is an attractive idea, and one I think the Alrick Man games demonstrate.  You can also find a lot of creativity in the games of other players who have favored the Vienna Gambit, including Jonny Hector, Dragoljub Janošević, Heikki Westerinen, Karel Hromadka, and Rudolf Spielmann.

The Vienna Gambit might make an interesting addition to a Four Knights repertoire, starting 1.e4 e5 2.Nc3 Nf6 when you can choose between 3.Nf3 or 3.f4!? for times when you are looking for an offbeat adventure.  Vienna Gambit game collections can be found at Chessgames (C29), Spielmann playing C29 as White, Vienna Gambit 3...exf4? 4.e5, Vienna Gambit f5 Variation, 365 Chess, Chess-DB, ChessTempo, ChessTempo2, ChessTempo1, and ChessAge.

A Chess Opening Repertoire for Blitz and Rapid: Sharp, Surprising and Forcing Lines for Black and White by Evgeny and Vladimir Sveshnikov, New in Chess 2015.
A wonderful book with lots of interesting lines, including the Vienna Game and Gambit (pp. 333 - 398).  The father and son authors focus appropriately on the line 1.e4 e5 2.Nc3 Nf6 3.f4 d5 4.fxe5 Nxe4 5.Qf3! which increasingly looks like White's best chance for getting a playable game and even the initiative, especially in blitz and rapid chess.  Main Vienna Gambit games discussed include Najdorf - Chaves, Sao Paulo simul 1947; Lagarde - Bouget, Avoire Open 2012; Spielmann - Marshall, Breslau 1912; and Depasquale - Charles, Suncoast 1999, but many more games are discussed and analyzed in the notes. They also analyze 2...Bc5 3.f4! and 2...Nc6 3.Bc4.  Other openings covered include, for Black, the Alekhine and Queen's Gambit Accepted and, for White, the 2.b3 Sicilian, the Two Knights French, and the Two Knights Caro-Kann.

"Alrick H. Man Vienna Gambit Theme Tournament" by Michael Goeller, Kenilworth Chess Club (January 2011).  My first and (until 3 years later) last article on this theme tournament at the Marshall Chess Club that ran from December 1924 - April 1925 and was sponsored by club member and philanthropist Alrick H. Man.  In this first article, I had annotated the game Carlos Torre - C. E. Norwood, which began 1.e4 e5 2.Nc3 Nf6 3.f4 d5 4.fxe5 Nxe4 5.Nf3 Bg4 6.Qe2!  I will soon be posting all of the games from this theme tournament.  Update: the final article on this tournament contained all games and analysis.

The ABC of the Vienna by Andrew Martin, ChessBase DVD (2009)
Reviewed by Louis Lima.  "IM Andrew Martin argues that the Vienna is a good practical choice. White can steer the game into all manner of interesting positions according to Black’s response. He may play sharply or positionally. Black must respond very accurately to demonstrate equality.  Video running time: 3 hours 42 minutes."

"The Rough Guide to Vienna" by Gary Lane, Opening Lanes #119 at ChessCafe (2008).  Discusses some games where Black plays the passive d6 defense, which is generally not effective against the Vienna.

Shock and Awe in the Vienna Gambit by George Eraclides, Pawn's Progress blog (October 2006).  An interesting game of the author's with the Oxford d3 line and eventual O-O-O!?

The Vienna Game C23-C29 by Gregory Huber, ChessBase (2006).  Reviewed by Hansen.  "The work consists of a clearly laid out database containing 26 texts and 330 games, 220 of which have been annotated by the author. In addition there is a large database containing more than 27,000 games (a good 300 of which have been annotated), a training database with 124 training questions and a large opening tree constructed from all the games."

White Repertoire 1.e4 by Alexander Bangiev, ChessBase CD (2003)
Though I do not agree with all of Bangiev's opinions on these lines, I think he makes a very thorough and useful presentation and analysis, covering lots of lines and offering many analyzed games.  The rest of the repertoire is very interesting, along the lines of "the Big Clamp" theme.  If you are interested in lines with an early f4 for White, get a copy of this while it still exists.  You can find a useful review at Seagaard by Pelle Bank.

The Complete Vienna by Mikhail Tseitlin and I. B. Glazkov, Batsford (1995).  A little dated, though some analysis in various lines is interesting.  Considers 5.Qe2 (Paulsen's move, which is not so inspiring), 5.Qf3 (where discussion of the line 5...Nc6! 6.Bb5 Nxc3 is still focused around 7.bxc3?! even though the authors note that 7.dxc3 is forced), 5.d3 when 5...Bb4!? and 5...Nxc3 6.bxc3 d4 are given deep treatment, and 5.Nf3 where the authors look at a wide range of Black responses but definitely show 5...Bc5! to spell trouble for White.

Vienna Game by Alexander Konstantinopolsky Vladimir Lepeshkin, Batsford (1986)
Accomplishes significantly less in 119 pages than Harding does in 104, with only 11 pages devoted to the Vienna Gambit and a mere mention of 5.Qf3 when 5...f5 is said to equalize, which Harding had already shown to be in doubt.

Vienna Opening, Tim Harding, Batsford (1976)
The Vienna Gambit sections focus most on 5.Nf3 and 5.d3, both of which receive their own chapters, while analysis of 5.Qf3 f5!? offers some depth thanks to the discussion of a series of articles in the Soviet journal 64.  A useful historical reference, with very good discussion of historical developments.  In English Descriptive notation.

That Jobava-Mamedyarov game is not very inspiring of course and I think 6...Bf2+ even more annoying. White tends to get behind in development.
5.d3 Nxc3 6.bxc3 d4 7.Nf3 Nc6 8.cxd4 Bb4+ (and Black is the one playing gambit) doesn't appeal to me either but 5.Qf3 (Spielmann) seems to be underrated. It's equal of course, but either White gets a dynamic middle game or an unbalanced endgame and that's not bad at all.

There is some more stuff though; for instance 4...Be7 is a kind of Cunningham Gambit.

If White prefers a quieter life 3.g3 is worth considering, as this avoids the strong ...Nf6 and ...d5 variation.
Finally the Vienna Gambit can be used against the Alekhine Defence if White doesn't mind 2.Nc3 d5 3.e5. Unfortunately the Steinitz-Variation is very demanding; this addition would result in a coherent repertoire especially if White takes up the GPA (see my comment on the previous article).

I can see some players having a similar issue with the 1.e4 e5 2.f4 move-order into the Quaade/Hamppe-Allgaier lines- the Modern Defence (with 2...d5 3.exd5 exf4 being the most forcing route into it) seems to be holding up as well for Black as 2.Nc3 Nf6 3.f4 d5 these days. I don't see the King's Gambit Declined setups with ...Bc5 (which I haven't yet covered at my site) as a major objection though in either case. I plan to revisit and update my analysis of these lines in the near future, especially after having examined John Shaw's mammoth effort on the King's Gambit.

Thanks for the comments. I think it was your comment on my first Alrick H. Man post, MNb, that put me off that project for three years. I agree: from a purely objective viewpoint, White has no advantage after 1.e4 e5 2.Nc3 Nf6 3.f4 d5 and Black has good chances with preparation. But, as Kasparov so succinctly put it when asked about Nakamura's experiments with 2.Qh5?!: "Chess is sport." The historical byways are still viable options -- especially when most of your opponents (especially at the amateur level) will not have a clue about the theory. There are lots of ways for Black to go wrong, most of which have been long known (including the simple mistake 1.e4 e5 2.Nc3 Nf6 3.f4 exf4? 4.e5 as Ian points out), but which are not always known at the board.

I have been enjoying my exploration of the Vienna Gambit. There are some great classic games in that line that I had not really looked at before.

Ultimately, one of my interests is looking at chess history and seeing if that history can be brought back to life. Exploring historical chess openings is one way to do that, and I love sperlunking through the crypt of forgotten chess games in old newspapers and finding ways of reviving some of their ideas. I think of it as a very chess-positive adventure -- showing that there is a lot more to the game than the Catalan. I don't know why anyone would want to kill the complexity that this adds to the game, or drive a stake through the heart of these rare openings. The more we do that, the more we forget chess history and end up diminishing chess.

Well, I do think Spielmann's 5.Qf3 can be brought back to life. That pleases me, as he is my chess hero.

See my final article on the Alrick Man event where I offer links to all of the analysis and related articles:
http://kenilworthian.blogspot.com/2014/08/the-complete-alrick-h-man-vienna-gambit.html

The final article can be found here:
http://www.kenilworthchessclub.org/games/java/2014/alrick-man-complete.htm

And the final PGN here:
http://www.kenilworthchessclub.org/kenilworth-pgn/alrick-man-complete.pgn

By the end of my journey, I came to the conclusion that Spielmann's Qf3 line is certainly the best for White and definitely makes the Vienna Gambit playable.

The Vienna Gambit for the Club Player by Colin Payne and Mike Read is a nicely presented book with lots of diagrams that covers all of the major lines of the Vienna Gambit from the White perspective. Besides the lines covered on this site, they also cover what they call "The Googly": 1.e4 e5 2.Nc3 Nf6 3.f4 d5 4.exd5!? e4 where the main line (which can arise from the traditional Falkbeer Counter-Gambit) continues 5.d3 Bb4 6.Bd2 e3! 7.Bxe3 O-O! with sharp gambit play for Black that is not bad for White, while the line overall is generally in White's favor. A useful book with plenty of diagrams.
https://www.amazon.com/Vienna-Gambit-Club-Player/dp/B094TCDN6N