I have annotated three games played by SM Yaacov Norowitz at the North American Open in Las Vegas. In one game, against the world-ranked Ilya Smirin, he pulled out a draw from an apparently lost position (see diagram above).  Yaacov may well be the highest rated player since Claude Bloodgood without an international title, and before long he might just get an invite to the US Championship based on his rating alone. 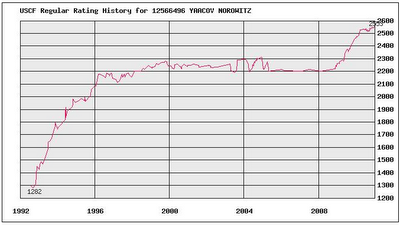 It's close: Norowitz is 2550 USCF and 2375 FIDE, but the untitled Jorge Sammour-Hasbun is 2603 USCF and 2463 FIDE (according to Chessbase; for some reason he doesn't seem to currently have an official FIDE rating).

I stand corrected! Thank you for the information.