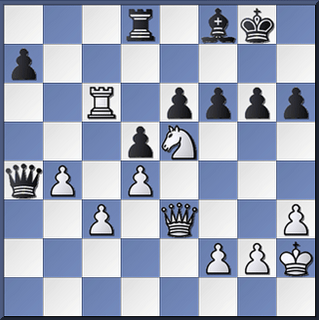 Costigan - Shen
White to play
The New Jersey Knockouts gained sole possession of first place in the US Chess League Wednesday night by beating the Philadelphia Inventors 3.5-.5. With a tie for Boston and loss for Seattle, the Knockouts win the Eastern division and almost clinch the top ranking going into the playoffs (see Standings). With a win or draw next week, the Knockouts will have the best record in the USCL which means they get draw odds in the quarter- and semi-final matches and choice of color in the championship match.

I have annotated the games below, and you can download the PGN file.

GM Joel Benjamin returned to match play against GM Sergey Kudrin on Board One after his absence against Boston in Week 8. Benjamin has a perfect record against Kudrin, but playing Black on Board One he was amenable to a draw, so when Kudrin proposed it in an equal position (that was similar to positions they had contested to a draw twice before in tournament play over the years) Benjamin naturally accepted.

GM Boris Gulko continued his complete dominance of opponents by taking down FM Tommy Bartell on Board Two in just over 20 moves. Bartell never really seemed in the game, playing into an inferior line of the Queen's Gambit Exchange Variation as Black and then making a number of inferior moves to allow a speedy Gulko victory. I have seen Bartell misplay this line before as White without getting punished. But against Gulko, the slightest misstep -- especially as Black -- can be fatal.

The most difficult game of the night was definitely the match-up of young Victor Shen and Richard Costigan on Board Three. Costigan played a slow and rather closed variation of the Torre Attack that is not known for excitement. But Shen made the mistake of opening the a-file for White, when he came under some pressure. White definitely had the initiative and attacking chances. Costigan struggled, however, with time pressure, which probably caused him to miss a winning line: in the diagram at the top of this post, it appears that White might be in trouble because his Knight is attacked and cannot move without hanging the Rook. But Costigan could have played 41.Qd3! (41.Qg3 is also strong) forcing 41...f5 (41...fxe5? 42.Qxg6+ and Rc7 mates) when simply 42.Rxe6 leaves him with a won game. Instead, Costigan sacrificed the Knight, which gave him chances also but he was not able to capitalize in time pressure. Meanwhile, Shen defended carefully and eventually found a way to break through for a winning attack of his own. A lucky break for New Jersey, though we fortunately did not need it with the success on the other boards.

On Board Four, Sean Finn continued his excellent play against USCF Online editor and WGM Jennifer Shahade, who clearly was not well prepared for their game, managing her clock poorly and getting in time trouble. Meanwhile, Finn played an excellent attacking game. Though he used a line against Black's O'Kelley Sicilian frowned upon by theory (1.e4 c5 2.Nf3 a6 3.d4 exd4 4.Nxd4 when Black can play e5 without having to face Nb5), he managed to get a clear advantage and eventually to develop a strong attack that he carried to victory with a number of impressively strong moves. I think we will be hearing a lot from this young man in the future. He had a chance at the upset prize but was beaten out by Amanda Mateer (who overcame a 300-point deficit on bottom board in Arizona's stunning win against Seattle).

The Knockouts play the Queens Pioneers to finish out the season next Wednesday. If they win or draw, they will go into the playoffs with the best record in the League.

Posted by Michael Goeller at 7:45 AM

I think the Kudrin draw offer is actually illegal under USCL rules?