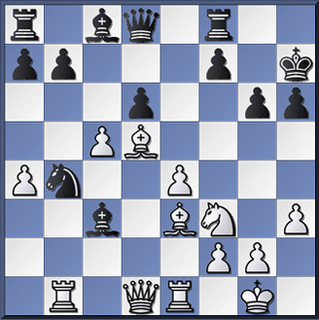 Shen-Esserman
White to play
Due to a busy work load this week, I am only now getting around to posting my analysis of the NJ Knockouts' stunning sweep of the Boston Blitz 4-0 on Monday night in week 8 of US Chess League action. The victory gave the Knockouts first place in the Eastern division, for which they were tied with Boston going into the match. Though it was only Boston's second loss of the season, it was also their second 4-0 loss (the first to the Dallas Destiny in Week 3). New Jersey is now tied with Seattle (in the Western division) for the best record in the League at 7-1.

I have annotated the games below, or you can download my PGN file.

Fans were surprised that team captain and first-board anchor GM Joel Benjamin was not playing in the biggest match of the year. But the NJKO blog reports that GM Benjamin had a prior commitment that was known about since August. Fans could ask for no better substitute than GM Boris Gulko, who seems almost unfair to unleash on Board Two. He proved yet again that he is one of the strongest players in the League, beating GM Eugene Perelshteyn in a fascinating isolani position that was practically a text book illustration of how to deploy a Knight on the outpost squares c5 and e5 to provoke weaknesses or exploit tactical opportunities. The game also features a nice "GM Exchange sac," which is often found in Gulko's games. White had pressure throughout, and the "Gulko Garrote" eventually forced Perelshteyn to cough up a pawn, giving White excellent winning chances. In a failed attempt to generate counter-play, Perelshteyn sacrificed a second pawn, and eventually Gulko managed to get connected h- and g-pawns in a Rook ending that he marched down the board to force Perelshteyn to surrender. This was a brilliant game and a deserving candidate for Game of the Week honors.

Dean Ippolito's victory over Jorge Sammour-Hasbun on Board Two was, like the win on Board Four, a surprising bonus. Though Ippolito solidly defended an elite-theory line of the Catalan as Black, he had a passive position throughout the game, with Sammour-Hasbun controlling the c-file and pressuring Black's backward c7-pawn. Ippolito seemed forced into contortions to create a solid defense, and though he succeeded in doing so it seemed the most likely result would be a draw. But with trouble on the other boards, Sammour-Hasbun was not willing to split the point and so searched desperately for a winning idea, burning up time on his clock while doing so, which led to an eventual time-pressure blunder that lost a piece (his Bishop) to an interesting trap. Typically in this line, White's Bishop goes to a5 to pressure the c7 pawn, but that Bishop can get a bit out of play there. Ippolito blocked the Bishop's escape route by advancing a well-defended pawn to b4, which should have forced Sammour-Hasbun eventually to exchange his Bishop for a Knight at b6, allowing Black's pawn at c7 to escape the pressure along the c-file by capturing cxb6. However, in trying for the win, Sammour-Hasbun allowed a situation to arise where the Knight had moved to d5 and his Bishop had no way to escape when attacked by Rb5. After he lost the piece, there was simply not enough compensation, and Ippolito played carefully to gain the full point.

On Board Three, NM Victor Shen gave a brilliant demonstration of why the Italian Game is still going strong, using a line that has had a 100% success rate in USCL games (see my notes) to build a powerful and sustained attack that carried him to victory. The critical move of the game is a real stunner. You can challenge yourself to find it in the diagram at the top of this post.

The confident and strong play of Gulko and Shen eventually made it seem that victory was assured for the Knockouts, and the wins by Ippolito and Andrew Ng on Board Four were just the "icing on the donut." 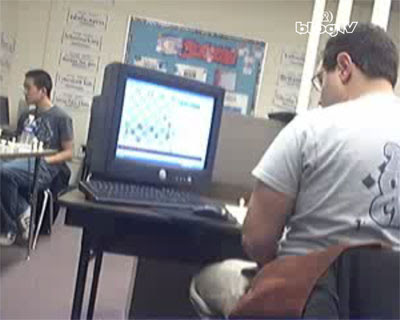 No one expected Cadet Champ Andrew Ng to pull out a win against Andrew Wang on Board Four. In fact, until late in the game, I would have been surprised if he had been able to draw. But Ng has demonstrated in several games that he has a strong fighting spirit that more than makes up for occasional mistakes in the opening stages. Ng played a well known line against the Moscow Variation of the Sicilian (with 3.Bb5+ Nd7!?) that had been used even by Kasparov with success. But he could not find the best way to get his Nd7 into play and wasted critical tempi by playing Nb6 and then Nc8(?), which allowed White to force the win of a pawn. However, Ng never quit and forced his opponent to find strong moves at every turn, until late in the game, with mutual time pressure (both players were down to the increment at one point), when Wang could not sustain his otherwise excellent effort and faltered, allowing Ng a pair of Bishop forks that won the day.

Sweeping perennial league rival Boston in the most critical game of the season surely will boost New Jersey's already lofty spirits. I hope they can carry on this effort through the remaining two matches. Next up are the Philadelphia Inventors (who they beat in Week Two) on Wednesday, October 28th at 7:00 p.m. and then the Queens Pioneers on November 4.

Posted by Michael Goeller at 7:48 AM