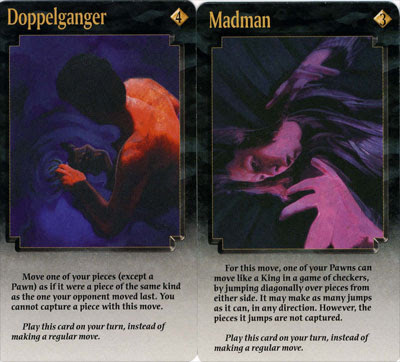 Knightmare Chess would make for an interesting gift or an amusing diversion during this season of Halloween. It is essentially a deck of cards to be used during chess to add an element of chance (or "chaos") to the game. Each card allows you to do something unusual, such as moving a pawn like a King in checkers (see card above). Though the original deck and its second edition are currently out of print (making one of my decks rather valuable I suppose), the second set of cards called Knightmare Chess 2 can be had for under $15. I am especially intrigued by the many "handicapping" possibilities that the game offers, since I frequently play for fun these days against beginners, and the cards do naturally create possibilities for less skilled players to win.

The game is essentially a translation of the French language card game "Tempete sur L'Echiquier" (or "tempest over the chessboard"), discussed recently by Robert Oresick at the BCC Weblog, which seems to be out of print. However, while the French cards try to convey a sense of fun and slapstick, the Knightmare cards create a more mysterious, medieval, and dark mood -- perhaps in emulation of Magic the Gathering. I have owned the game for many years and though I have only played it once or twice I have often used it as a class example in my game design class where it has often inspired students (see, for instance, "Lone Roll Poker" from my class). Recommended.
Posted by Michael Goeller at 4:25 PM

It's a bit too interesting of a gift, in my experience. I'm a chess player and my non-chess playing friends frequent board game stores: I have been given a set of Knightmare Chess more often than I've actually played it I think...

You give a Game Design class. How does one get a job like that? :-)

The course is actually called "Collaborative Writing Processes" and is offered through the Writing Program at Rutgers. I added the game design element when I started teaching it, and I think it makes for a much more fun and involving experience for students (though you would be amazed at how few have actually played board or card games, their lives being so oriented to computers and the web).

The challenge comes with these cards. It's a game worth playing.