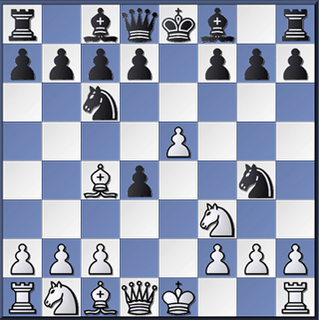 The last game of the Efimenko - Short match in Mukachevo, Ukraine (which Short drew to win the match 3.5-2.5), featured the rather rare line against the Two Knights Modern or Scotch Gambit 1.e4 e5 2.Nf3 Nc6 3.d4 exd4 4.Bc4 Nf6 5.e5 Ng4! You can find it annotated by GM Klaus Bischoff at ChessBase and by Dennis Monokroussos at his blog, and I imagine it will draw more commentators over the coming weeks. This line is much better than its reputation and I should really take a closer look at it in these pages.

After 5...Ng4 (which is a move I have studied from both sides of the board), White has a choice between recovering the pawn with 6.Qe2 Qe7 (which generally turns into a complicated ending after Black breaks with ...f6 or ...d6 and queens are eventually exchanged) or sacrificing it with 6.O-O. I prefer 6.O-O myself, but Black then has quite a few ideas, most of which are barely discussed by theory, including 6....Bc5 (transposing to a line from the Max Lange that is better than its reputation) and 6....Be7!? (with many possible continuations, including the shocking 7.Bf4 g5!? 8.Bg3 h5!?), but the most common move is 6...d6. White then must play 7.exd6 and now Black has a choice between recapturing with the Bishop or the Queen. Theory approves the Bishop recapture 7.exd6 Bxd6 8.Re1+ when it is generally thought Black must play 8...Kf8, but I recently lost a Garden State Chess League game against NM Peter Radomskyj when he played the surprisingly good 8....Be7!? and proceded to dismantle me in an equalish ending. Meanwhile, theory frowns on the Queen recapture with 7.exd6 Qxd6 because the Queen is exposed on that square. But Short played 7...Qxd6 anyway and was fine after 8.Na3 a6 9.h3 Nh6! followed by ...Nf5, demonstrating pretty conclusively that theory really knows nothing about this line. Food for thought, and one reason I am not playing the Urusov Gambit much these days....
Posted by Michael Goeller at 8:46 AM

thats a shame, the urusov needs some high level support, but it appears tranposition to the scotch gambit gives black equality, if only the anti max lange line didn't exist .

What do you think about the 6.Bxf7+ line? Nobody talks about this Line. By the way the move recomended by Lane in his book "The Bishop's Opening" is 6.Bf4 which I don't like very much.

This line with 5...Ng4 is not bad; I once played it in Edelman-A Shaw, Boston Met League 1988, to avoid the main lines in which my opponent was well-versed.

I returned to these lines later here:
http://www.kenilworthchessclub.org/games/java/2013/C55-Ng4.htm