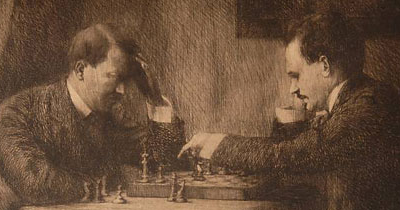 In "Based on Life or Fantasy, a Picture Goes to Auction" (The New York Times, September 30, 2009), Dylan Loeb McClain presents a balanced report on an etching meant to depict a chess match between Hitler and Lenin. Let readers and potential buyers be the judge of its authenticity. I just don't know who would want to own a picture of either man, let alone one that shows both. (See also items from ChessBase and from Edward Winter).
Posted by Michael Goeller at 2:45 PM