GM Boris Gulko, immediately following his win.
The New Jersey Knockouts last night became the only US Chess League team with a perfect 4-0 record after they beat perennial rival New York 2.5-1.5 thanks to a difficult win by GM Boris Gulko. All the games were very tense, and time pressure played a role on every board. But the games were among the most interesting and hard fought this year, and the match could easily have been a draw. I have analyzed the games and posted them below (as well as a PGN file for download).

GM Joel Benjamin's game against GM Georgi Kacheishvili featured a fascinating line of the Caro Kann that begins 1.e4 c6 2.Ne2, which was analyzed by Ruben Felgaer in Secrets of Opening Surprises #8. Though the game ended in a hard fought draw, it was certainly a good advertisement for the opening as Benjamin had several winning chances which he missed in time pressure.

One of the most balanced and hard fought games of the night was between 62-year-old GM Boris Gulko and 26-year-old GM Pascal Charbonneau. Gulko has been perfect in USCL action, with a 5-0 record in his two years of play, but Charbonneau was his toughest challenge yet. Though Gulko gained a slight edge out of the opening, Charbonneau battled back with a pawn sacrifice that gave his knights the chance to attack behind enemy lines, eventually winning back the material and gaining a dangerous outside passed pawn. Gulko found a fascinating resource, exploiting back rank mating threats to force Charbonneau to surrender a piece. But the young Canadian GM fought on, trying to take advantage of potential stalemate possibilities due to his hemmed in King. And he should have been able to force a draw late in the game, but he overlooked that last chance in time pressure (see diagram below). 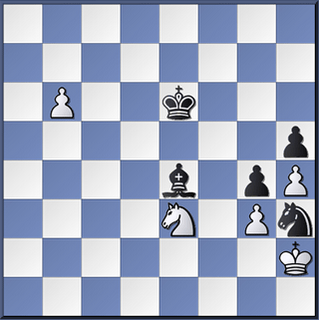 Gulko was evidently very happy after the game, and it was a well-deserved win despite the drawing opportunity he had allowed.

It was great to see FM Mackenzie Molner back in action for New Jersey, since his games have always been the most tactically deep and exciting. Molner, who has had success in poker of late, is not afraid to take risks and to enter very complex positions, and his game against NM Matt Herman was no exception. Molner had the advantage throughout, but he only kept his attack going with some aggressive play late in the game that allowed him to get every piece into the action. Though he started out well ahead on the clock, he ended the game in time pressure and even missed a mate in three (with 27. Ng6+ fxg6 28. Qf6+ Ke8 29. Qf8#). But he eventually put the game away with a nice Queen sacrifice that forced a Rook-up ending.

Though it had its share of errors, I think that will be a candidate for Game of the Week.

Anna Matlin played bottom board against Kenilworth Chess Club Champion Yaacov Norowitz, who is certainly unbeatable at that position. Yaacov has been playing a lot of chess recently and his current rating is 2349 USCF, which is tremendously better than the 2212 rating he had last year (and which is used for determining team averages). That's not to mention his ICC blitz rating, which hovers well over 3000. His blitz experience alone gives him a tremendous advantage in USCL play, where the Game-90 with 30 second increment inevitably puts players in time pressure. Norowitz used his favorite anti-KID system (which he described in a lecture on the Stonewall Attack at the KCC), but he seemed to be playing the clock more than the board throughout his game with Matlin, risking his advantage in order to put the onus on her to come up with a plan when she was already far behind on the clock. That strategy worked perfectly, and Matlin missed a chance to complicate the game and instead allowed Norowitz to exchange into a winning endgame which he played perfectly to the finish.

Though it was the toughest match so far this year, and could easily have been a draw, it was also a great demonstration of New Jersey's strength and character under pressure. As the only team at 4-0 after four weeks of play, the NJ Knockouts are doing everything right to guarantee a spot in the playoffs and a chance to claim the championship title.

Posted by Michael Goeller at 12:48 PM

The solution is in my notes to the game: Nd5! and Black is soon forced to capture both the Knight and the Pawn, resulting in stalemate. If instead Nxg4 hxg4, the h-pawn can suddenly move, preventing stalemate.

See also the recap on the NJKO blog at: http://njknockouts.blogspot.com/2009/09/k-vs-k-uscl-style-knockouts-win-again.html

Then the N/e2 is blocking and black has an "OK Pirc".

That's a good question, Mark, but White can then transpose to the fianchetto line against the Pirc (with d4, g3, Bg2, Nc3, O-O, h3 in whatever order works).