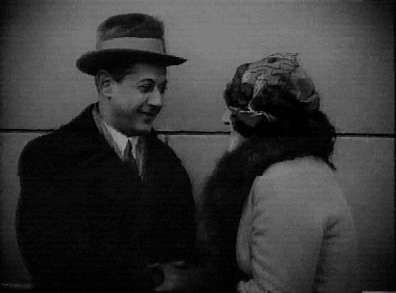 It was a good night at the Kenilworth Chess Club this Thursday. I won an interesting miniature against Summer Tournament leader Greg Tomkovich, trying out a new opening for me, "The Janowski-Indian." Steve Stoyko then showed us (on the big-screen, using Fritz) his three wins from The Viking Last Saturday Quad held July 30 in Mount Arlington. And there was still time to show a film for the Summer Chess Film Festival, to socialize, and play a few blitz games.

I will post the Tomkovich and Stoyko games tonight or this weekend. But the highlight of the night for me was seeing "Chess Fever" or Shakhmatnaya goryachka (Russian, silent 1925). I picked it up recently through Amazon.com as part of Three Soviet Classics.

I had heard about Chess Fever years ago. Bill Wall, for instance, discusses it in his review of chess in the movies at Chessville. I had never imagined that it would be easy to find or so worth seeing. I did a little online searching and discovered that the film is also included as a bonus on a few other Soviet films of the same era, including Bed and Sofa and By the Law. So it is much more widely available than I would have expected for a chess-themed 28-minute silent short. It is worth seeing if only to catch a glimpse of the 1920s greats in live action. It takes place during the Moscow 1925 tournament and shows many of the GMs of the day taking part. And Capablanca has a very memorable role in it.

The basic plot is that this young man has forgotten all about his fiance, Vera, due to his obsession with chess. When he forgets their wedding (a small affair at the Soviet bureau) while playing a game against himself, and then continues to study chess problems at her feet rather than begging forgiveness, it is too much for her and she sends him away. Both vow to kill themselves. There are a number of twists and turns and some wonderful gags, all centered on the chess obsession sweeping the city in the wake of the 1925 Moscow tournament. For me, though, the best moment is Capablanca's cameo (see image above). Vera, who knows nothing about chess and just hates it, meets the handsome Capablanca outside the tournament. She does not recognize the champion, of course. She tells him about her troubles and how chess has taken her future husband away from her. The "Latin Lover" Capa responds, "When I meet a beautiful woman, I can think of nothing else but her." She says, "Finally, a man who doesn't care about chess!" Capa's look seems to say, "Sure, Baby..." in that Mike Myers sort of way... They go off together and she is suddenly transformed. She is as fascinated with chess as her lover, with whom she is happily reunited at the end.

The picture above is taken from the excellent Chess Graphics site, where you can find a number of screenshots from the film. I'd highly recommend buying or renting it, especially if you can show it, as I did, to a room of chess aficionados. Since it is a silent film, there are lots of opportunities to insert your own dialogue and wise-cracks. And since the famous players from the tournament are not identified on film, it's an opportunity for friends to show off their knowledge of chess history (or their ability to read the Russian name-tags).

It was a pleasure to see so many players at Kenilworth last night, especially in the middle of the summer when we usually see a big decline in turnout. Welcome especially to the new group of young people who have begun attending. I think things are heating up at the club...

Posted by Michael Goeller at 11:28 AM