Anticipating the 40th Anniversary of the 17th Chess Olympiad in Havana, Cuba (October 23-November 20, 1966), I thought I'd try to learn more about the supposed offhand game that Bobby Fischer appears to have played with Fidel Castro. I say "supposed" and "appears" since the facts of the case (including news reports and photographic evidence) seem to suggest that Fischer was only doing some strong kibitzing in a game between Castro and Filiberto Terrazas and did not exactly play the Cuban leader "mano a mano." The evidence I have remains a bit ambiguous, however, and so I'd welcome more information or photographs to settle the matter conclusively (if Edward Winter, for instance, has not already figured this one out).

Let's start with the famous Fischer - Castro photo, which appeared in Chess Review. The caption to the photo reads as follows: "Fischer is apparently removing one of Premiere Castro's men in a friendly game. World Champion Petrosyan [sic] had drawn such a game with Castro. In background (with mustache and light tie) is Drimer, captain of the Roumanian Olympiad team." Then there is a second photo:

The images and commentary suggest that both Petrosian and Fischer had done their best to appease Castro's ego by drawing or losing a game to the dictator. Indeed, the members of the Eastern bloc contingent seem to be thanking Fischer for playing along with their obsequious scheme. I had suggested as much myself in a previous post, which was based on my recollection of this caption and some subsequent writer's commentary (a source I cannot recall). But on closer inspection, I now think that view of the event is completely mistaken and probably some caption-writer's Cold War-inspired invention, which he never bothered to fact-check (note the word "apparently").

A different view of the incident is presented in the article "Bobby Fischer's Relationship with Cuba" by Miguel Ernesto Gomez Masjuan (Cuba Now No.23 - August 19, 2004) and reads as follows:

"During this tournament [the XVII World Chess Olympics--MG], sheer chance made Fischer and Cuban President Fidel Castro play against each other in an unusual chess game. Mexican Master Filiberto Terrazas wrote in an article published in Jaque Mate magazine (Havana, 1966) that it all started when he [Terrazas] and Fidel Castro sat down to play a match. Some minutes after the game began the Cuban leader received an important backup from Soviet chess player Tigran Petrosian. Then Terrazas asked Fischer, who was nearby, for help. / That’s how a game between the four began: Fidel Castro-Tigran Petrosian on one side (whites) and Filiberto Terrazas-Bobby Fischer on the other. In the end, whites won. / Testimonies of those times point out that Fischer talked for a while with the Cuban President and, before saying goodbye, gave him an autographed book." In Terrazas's account, the opening played in the consultation game was a French Defense, likely the Winawer (which he calls "Nimzowitsch") variation 1.e4 e6 2.d4 d5 3.Nc3 Bb4.

Here is a photo that corroborates part of that story of the events. It shows Terrazas playing Castro with some of the same group of spectators as in the Fischer photo (including the woman in the flowered dress). 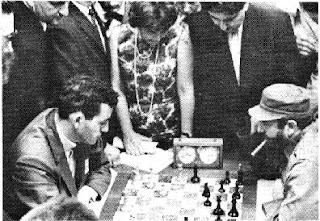 The game Filiberto Terrazas vs Fidel Castro (Olympiad 1966) offered at Chessgames.com clearly supports Terrazas's version (compare the picture above to the position at move 12 in the game). Also, a close look at the first picture above suggests that Petrosian is not reaching to shake Fischer's hand but that of Terrazas in the lighter-colored suit reaching below Fischer.

However, things remain a bit ambiguous if we compare the available photos of this event more closely. If you look carefully at the piece position in the photo of Fischer (see close-up below), it appears that he has just played 3.exf5 in a game that likely began 1.e4 e5 2.Nc3 f5 3.exf5. It is also possible, if unlikely, that Castro is using the Black pieces but playing as White (which would fit somewhat with Terrazas's account), in which case the game began 1.e4 e5 2.f4 exf4! (with the White pieces playing as Black).


I rather like this second possibility, though it is sheer speculation, since it might explain the vigor of Fischer's kibitzing, seeing as he had written his famous article "A Bust to the King's Gambit" in 1961 and so his stance on accepting the gambit would have been well-known. In any event, this game is not the one between Terrazas and Castro given above, which began with Castro as Black accepting the King's Gambit, nor is it the consultation game that Terrazas describes, which was a French Defense.

The best explanation I can offer is that Terrazas and Castro played at least three games, with Fischer and Petrosian offering advice in two of them: a French Defense and a game where Castro appears to have played 1...e5 and 2...f5 as Black. That at least three games were played is also supported by an examination of a third photo of the event that depicts Petrosian's advice to Castro.


A close look at this game shows that it is certainly not the King's Gambit game given above, nor (because Castro and Petrosian appear to be conducting the White pieces) the game depicted in the first photo where Fischer is White. It could, however, be the French Defense that Terrazas describes. Therefore, there must have been at least three games in the match, two of which involved Fischer's consultation.

Though I don't have all of the facts, it does appear that the commonly accepted view of this event in American sources is mistaken. Fischer did not purposely lose a game to Castro. Instead, he participated in what was likely two consultation games on the side of Terrazas against Castro and Petrosian. Seen in light of the Cold War (with the 1961 Bay of Pigs and 1962 Cuban Missile Crisis fresh in memory), the incident practically becomes a symbol of how the warring superpowers at that time struggled against each other in mediated fashion, using Cuba and other countries as surrogates in their contest for power.

I welcome further information or interpretation.

Update: Edward Winter kindly posted more pictures of Castro in Chess Notes #4502 at the 1966 Olympiad, though none related to the game with Fischer.
Posted by Michael Goeller at 3:48 PM

I have two quick comments, neither of which is intended to critique your interpretation of the events. Instead, they add a couple of facts to the mix that may or may not allow you or someone else to draw a fuller picture.

1. Re Fischer and the King's Gambit, don't forget that after his "bust" (which only applied to 3.Nf3 in the KGA) he played the KG three times in tournaments (once before Havana 1966 and twice after, in 1968). He also used it pretty regularly in his 1964 simul tour.

2. Fwiw, that's Lev Polugaevsky next to Petrosian; shouldn't he have been involved in some way, too?

i do not support fidel castro. but let me give u some info. politicians are very crooked people. if u can survive in politics. u can survive in a game of chess. and apparently, castro is at the head of the political chess game. to get to the top like that, u play a lot of that chess. chess is easy for him, and i wouldnt be surprised if he was pretty good at it.

Another photo which may be of interest can be seen on eBay:

About the game between Filiberto Terrazas and Fidel Castro,during the opening of the XVII Olympiad of Chess in Havana, I can say that only two games were played. The first one was Terrazas-Fischer vs. Castro-Petrosian and that game was lost by Terrazas-Fischer. After that, Castro immediately proposed another game to Terrazas but to be played without any help or advice, that game was won by Castro (evidently Terrazas played several weak moves in my opinion intentionally). Terrazas described those two games with his personal comments to the newspaper that day. I was 18 when the Olympiad, and I saw several rounds of that memorable event. Fischer was magnific with the Cuban people, he spent after the Olympiad, 15 days visiting several beaches and places in Cuba, some of them with Castro and Petrosian, who also stayed several days in Cuba after the competition.

hey to all , and my respects to all of you.
fraternally id like say , that todays world runs on speculations and suppositions , runs with not actual backed quotes nor verifiable data. The lack of todays essayists is the weak use of historical and verifiable data . as for your essay my dear friend is guided by your political view more than a look to the truth and finally please , if you like to persuade your point of view dont start saying your arguments are ambiguous it neutralizes the value of all the piece. to convince a blind political fanatic i give u a 10 . to persuade a person who uses reason and thoghts , i give you a 0 . sorry