The Kenilworth Chess Club's Championship has attracted one of its largest turnouts in club history, with 20 players in two sections. The Open section now has six players (including newcomer Tom Polese) who will complete a double round robin. The Chess Coroner has posted several games at his blog (with likely more to follow), including his own fascinating game with defending club champion FM Steve Stoyko.

Steve confessed that his game with John was one of the most challenging he has played in a club championship, forcing him to bring all of his strategic and calculating powers to the table. Scott Massey (who took a bye due to his difficult work schedule this week) compared the game to Johner - Nimzovich, Dresden 1926, which has been widely annotated (including online by Gary Lane). Steve said he had actually been thinking of that game and had almost played, like Nimzovich, 43...Ba6 when White would practically be in zugzwang. Instead he played a much more dramatic move, made even more so by the fact that his opponent had just offered a draw with both players down to about two minutes on the clock.

Meanwhile, NM Mark ("Mr. Houdini") Kernighan pulled another magic trick, winning a complicated endgame against Polese despite being down to less than 10 seconds plus 5-second delay for the concluding quarter of their game. I look forward to seeing that one analyzed at John's blog if we can get the complete score. 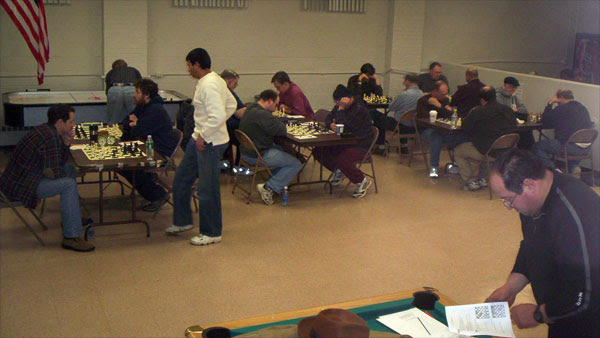 There were ten championship games in the main room.

Games were analyzed and "Fritzed" in the skittles room. 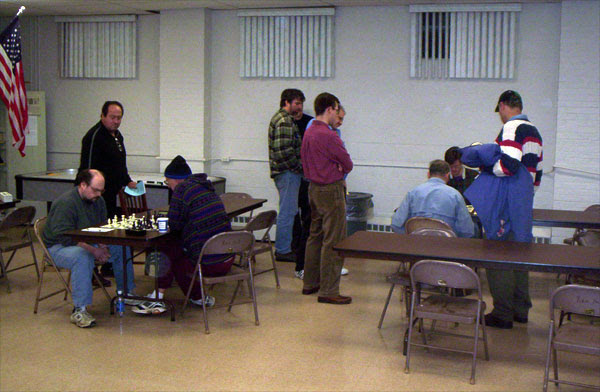