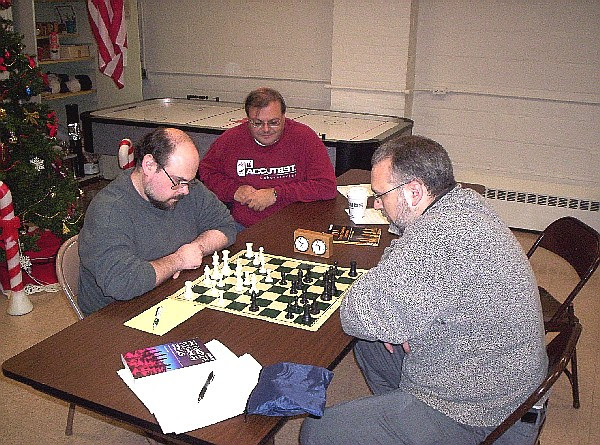 John Moldovan, Greg Tomkovich, and Mike Goeller
At the Annual Business Meeting, most of the current slate of club officers were approved for another term, including Joe Demetrick as President, Greg Tomkovich as Vice President, and Geoff McAuliffe as Treasurer. I stepped down as Secretary, nominating John Moldovan (The Chess Coroner) to take my place, which met with unanimous approval. I will remain as Webmaster for the club. We also approved the same rules as last year, including the same rules for the Club Championship, which will begin the second week of January. Shortly before the meeting began, John and I played a blitz game (I'll try to post a better version of that photo soon!) You might title it "The Coroner and the Kenilworthian."
Posted by Michael Goeller at 10:53 PM

I'm guessing John is playing some sort of London system.