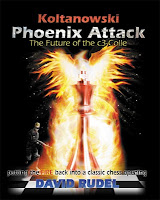 I recently received a copy of David Rudel's Koltanowski Phoenix Attack: The Future of the c3 Colle (Thinker Press 2011), which continues his excellent work with Zuke 'em (reviewed here in 2009) and The Moment of Zuke exploring and explaining the Colle - Zukertort systems.

The main focus of the Koltanowski Phoenix Attack is the line 1.d4 d5 2.Nf3 Nf6 3.e3 e6 4.Bd3 c5 5.c3 (rather than 5.b3 in the earlier volume), and Rudel has an important contribution to make to the theory of the main line with 5...Nc6 6.Nbd2 Bd6 7.O-O O-O 8.dxc5 Bxc5 9.b4!  This move is very interesting and was actually first tried by Edgar Colle himself in Colle - Euwe, Zutphen match 1924, so it's odd that it was thereafter generally ignored by theory. For example, in his otherwise excellent book Colle Plays the Colle System, Adam Harvey notes that 9.b4 was "An early experiment by Colle before he settled on the more usual 9.e4" and "dubious ... as it slightly weakens the queenside" (31).  Harvey renders this judgment, it should be noted, despite not pointing to any errors on Euwe's part on the way to losing that game.  Of course, 9.e4 has been the standard move and it is the only one mentioned in many texts on the Colle (including Andy Soltis's Colle System: Koltanowski Variaiton 5.c3), so there is bound to be some skepticism and prejudice.  Rudel does an excellent job of laying that prejudice aside by showing from the outset that the more traditional 9.e4 does not yield any advantage against best play by Black and may even put White at some risk.  If you are as convinced as I am that White needs something else here, then you will be quickly persuaded that 9.b4! is it.

I think anyone who spends time with Rudel's excellent book will want to give 9.b4 a try, and the book itself does an excellent job of teaching you how to make use of it.  Those who need more convincing should check out the game Miltner - Appel, Bundesliga 2004-2005, which shows the 9.b4! idea in action.  And there is no question that 9.b4 scores much better than 9.e4 in practice (though with many fewer games to go by at the moment).  Highly recommended.
Posted by Michael Goeller at 12:32 AM

Judging by the popularity of the Bd6-Meran Im gonna have to disagree with MNb that Bd3 is a loss of tempo. Im referring to 1.d4 d5 2.c4 c6 3.Nf3 Nf6 4.Nc3 e6 5.e3 Nbd7 6.Bd3 dxc4 7.Bxc4 b5 8.Bd3 Bd6 as played by many of the worlds elite, for example Anand and Aronian...
On the other hand I still don't exactly feel threatened when white plays the colle. Its more of a system to get a mid-game struggle, and in theory black should be equalising in some way or another.
Still, maybe I might look into it.

While the setup of the Meran is obviously very similar to the setup of the Phoenix [in reverse], the extra tempo takes the play in completely different directions, so the two cannot really be compared. In particular, in the Meran, Black does not have time to kick back the Bishop and then force ...e5 in. Instead he cedes the center to White. Compare that to the Phoenix, where White kicks back the Bishop, gets Q-side space AND is able to push his central pawns.

The two just cannot be compared.

A full review of this book that I did for ChessCafe can be found via the Wayback Machine:
https://web.archive.org/web/20130220004805/http://www.chesscafe.com/text/review830.pdf