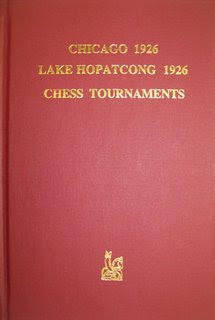 Those of us who collect chess books often choose works as much for their rarity and beauty as for the games and ideas they contain. Dale Brandreth's Caissa Editions has long catered to collectors, supplying limited editions of truly beautiful books, complete with library bindings, high quality paper, very readable fonts, multiple diagrams per page, attractive layouts, rare photographs, excellent indexes, and careful editing. Yet Caissa books not only exhibit rare quality but also supply rare content, as is the case with Robert Sherwood's excellent book of the Chicago 1926 and Lake Hopatcong 1926 Chess Tournaments, which finally brings to light many games that had long been missing from the historical record.

I have posted a page of four Tactical Puzzles from Chicago 1926.

As Jeremy Silman mentions in his review, even his "database of over 3,850,000 games only has 27 from the Chicago 1926 event, while the tournament book we’re about to discuss has 78!" Why is it that, until now (for the databases are already adding them), we have only had access to about a third of the games? Because, as with many tournaments, the majority of the games were never published. Only the games of the tournament stars (especially Marshall, Torre and Maroczy) were of much interest to the public, and so only the best of their games and a few others ever made their way to print and subsequently into the databases. Frank Marshall was personally responsible for adding two to the record, analyzing his games with Kupchik and Maroczy (certainly among the best of the tournament) in his Marshall's Best Games of Chess. And Gabriel Velasco collected all of Torre's games from the event for his book on the Mexican GM. But we owe a debt of gratitude to author Robert Sherwood for returning to photostats of the original score sheets (some of which proved "impossible to decipher") to puzzle out most of the moves for the rest.

Ironically, despite Sherwood's efforts, I think my favorite games from the tournament remain those that have long been known, including Marshall - Kupchik, Marshall - Maroczy, Maroczy - Chajes, and Showalter - Torre -- the last of which features a truly challenging tactical idea from Torre (see diagram below and in the puzzles), who found not only a winning idea but also the only move to survive (a move you can forgive Showalter for having overlooked when he played 20.Qxg7?).

Showalter - Torre, Chicago 1926
Black to play and win.
Yet some of the long unkown games are of interest as well, mostly for their fascinating endgames, as in Marshall - Isaacs and Kashdan - Lasker. In fact, I would say that those who love to study endings will find much to appreciate in Chicago 1926, since all of the games were hard fought (every draw and win well earned) and therefore typically feature some endgame play. The openings, meanwhile, were the standards of the time, including the Queen's Gambit, Ruy Lopez, Caro-Kann, Colle-Zukertort, and the London System, as well as the surprisingly popular Alekhine's Defense. There are a couple absolutely classic Ruy Lopez attacks (most notably Ed. Lasker - Chajes and Chajes - Showalter with their queen sacrifices) and classic Queen's Gambits (especially Marshall's games cited above). But it is in the endings where the games have the most to offer those more interested in the theory of the game than its human history. Sherwood has done a marvelous job of annotating every game to maximize its value to us.

Kupchik - Capablanca,
Lake Hopatcong 1926
Position after 19.Rf3? h5!
The section on Lake Hopatcong 1926 is also very well put together, with many notes in addition to those in the original tournament book by Herman Helms and C.S. Howell. Readers of these pages will likely recall my own fascination with the two Lake Hopatcong tournaments of 1923 and 1926. Comparing in a few places my own annotations to those of Mr. Sherwood, I am impressed by how much he adds to my understanding of these games.

My favorite game from Lake Hopatcong 1926 is probably Kupchik - Capablanca, where Capablanca's 19...h5 (see diagram above) long puzzled me, so that I was only too happy to accept C.S. Howell's fascinating explanation that the move was part of a deep-seeded plan to distract Kupchik's forces by luring them over to the kingside, thus strengthening his own queenside attack. I am still convinced that something like that happens in the game. But Sherwood's explanation of 19...h5! is even more persuasive. Having pointed out that 19.Rf3? was in error because the superior 19.Rg1 planning a g4 push would have given White some kingside chances, Sherwood notes that Capa's 19...h5! "takes advantage of the now blocked d1-h5 diagonal to forever preempt White's g2-g4, thereby freeing himself to operate unhindered on the other wing." This note is simply one of many that offer a deeper insight into these excellent games.

My only regret is that author Sherwood and editor Brandreth did not conceive of a separate volume devoted to the Lake Hopatcong tournaments of 1923 and 1926 -- creating coherence of geography rather than chronology. Most of the 1923 games had long been lost to the historical record and are only now making their way into the databases. I was able to uncover 42 from Herman Helms's Brooklyn Eagle chess columns -- though I now discover that Phony Benoni (a.k.a. David Moody) has posted even more at ChessGames.com in an excellent page devoted to the event. And clearly Brandreth knew the event well, since he includes a great photo of the 1923 players (one of many photos that alone repay the cost of the book).

I think the combination of the two Lake Hopatcong events would have been at least as interesting as the current volume. My favorite game from 1923 is the long known Kupchik - Marshall, which Marshall annotated in his collected games. But there are many more of value, including the interesting game Kupchik - Chajes, which offers what I called "An Opening Novelty from 1923." Though the Chicago 1926 tournament (which takes up only 152 pages) likely needed something more to fill out a book, perhaps there were other events that could have done it. Most of the action in 1926 was in Europe, of course, but there was a Chicago-London cable match and I see tantalizing hints in the game records of a New York 1926 event from which comes Maroczy - Tenner. I certainly understand the choice of Lake Hopatcong 1926, and I probably appreciate more than most the additional information on this historic New Jersey event; I simply regret the missed opportunity for a fascinating separate volume.

As I hope is clear from this review, I heartily recommend the Chicago 1926 and Lake Hopatcong 1926 Chess Tournaments, which can be had by sending a check for $40 plus $4 for shipping and handling to:

Posted by Michael Goeller at 5:08 PM

Thanks for your review of my book. I wrote it especially for readers like you who love the American chess of this period; it is gratifying that you find value in the notes I've provided.

I'm not a little embarrassed to say that I knew nothing of the 1923 Lake Hopatcong tournament until after Dale had agreed to my suggestion to include the Lake Hopatcong 1926 games and we had the book in more or less final form. If I had known of it, I would certainly have suggested including these games as well. I guess the 1923 event was simply lost to me the way the Chicago event has been to so many others. A book with all three tournaments is indeed the way to go.

Meanwhile, we have what we have and I hope it is of interest to chess readers. Should the hardcover edition sell out, which is a possibility, Dale and I would seriously discuss bringing out a small paperback edition that includes the 1923 games (especially as they are finally seeing the light of day). Thanks for suggesting this.

Much appreciation, again, for your thoughtful review.

Hi Bob --
Thanks for the note and for your excellent work on this book. Yes, I think a paperback that included the 1923 games would be a brilliant stroke, and would likely sell well even among those who had purchased the hardcover.

I had heard for many years about the Chicago 1926 score sheets, and it was my good fortune to play Dale at this year's USATE and have a chance to talk to him after and learn that this project was nearly complete. So I have been waiting a long time for Chicago 1926, and it is a pleasure to see what a great job you did with it.

michael
Your reviews and enthusiam for old and now obscure tournaments is a welcome addition to chess literature. all those who love chess history are indebted to you and your deication to this are of chess. to have readily accessible on the web is great

Of course the other possibility is to put together a small paperback on the 1923 tournament alone, with you providing the introduction (history) and "color commentary" and me/us providing the analysis. We could publish it with Dale or do it as on on-line PDF file on your blog that people could download for free. There are any number of possibilities.

One of the attractive features of our collaboration would be that you could provide a lot of information on the openings, as you have done in your own work, which is the most difficult aspect of covering historical chess. Anyway, a thought.

Looks like Phoni Benoni has posted 48 of the games. We could work with that. A small paperback, reasonably priced, would I think be a welcome addition to the literature.

Bob --
I'll send you a note by email. Sounds like an interesting project!
Michael