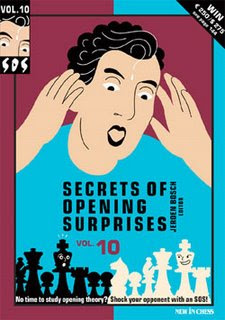 I have made no secret in these pages that I am a big fan of the "Secrets of Opening Surprises" series from New in Chess, edited by Jeroen Bosch. I own every volume and expect I'll be adding many more to my collection in the years to come. Its short article format has a strong appeal, since it allows you with relatively little effort to pick up an unusual opening line to try out in blitz or in a critical game situation. Only Everyman's "Dangerous Weapons" series comes close to offering such an interesting collection of offbeat opening lines. But even Everyman doesn't offer such a variety of authors and openings. I recently picked up "SOS #10" and thought it was about time I wrote a review.

Recent SOS volumes have featured 17 articles, and this one is no exception. Here are its contents:
Of course, as with most opening manuals, only a portion of the chapters have much relevance to my own repertoire. But I find that where it is relevant, it is usually very relevant indeed.

I also appreciate that Bosch offers a long aside regarding MacDonnell's 1.e4 e5 2.Bc4 Bc5 3.b4!? Bxb4 4.c3 which I have analyzed at some length as part of my Bishop's Opening site. I had concluded that White generally does best to transpose to the Evans Gambit after 4...Be7 5.Nf3! or 4...Bc5 5.Nf3! while using the opportunity to get into some fascinating gambit territory following 4...Ba5 5.f4! In my view, the only reason to play 3.b4!? is if you want to transpose to the Evans Gambit while side-stepping the more difficult 4...Ba5 lines; otherwise you might as well play 3.Nf3 when the natural 3...Nc6 4.b4!? gets you where you want to go anyway. Here I have to say I am a little disappointed with Bosch's discussion, which adds only two recent games (Heil - Podolnyy and Kurenkov - Tishin) to my analysis from seven years ago. In fact, he even makes an error in suggesting that White can reach the Evans Gambit via 4...Bc5 5.d4!? exd4 6.Nf3?! when I show that 6...Nf6! throws a monkey wrench in that plan. Similarly, White cannot reach standard Evans lines after 4...Ba5 5.Nf3?! due to 5...Nf6! 6.d4 0-0 7.0-0 d6 8.Ba3 Nxe4 9.dxe5 Nxc3 10.Qd3 Nxb1 11.Raxb1 Nc6 12.exd6 cxd6 13.Bxd6 Re8 =+ Paulsen--Asbeck, Dusseldorf 1863. I think Bosch would have been aided by a little more research here (or just a look at my analysis, which any Google search would have turned up). Nevertheless, I do appreciate that he offered this little extra idea for fans of the Evans Gambit.

Looking through the lines on offer in "SOS #10" you would be convinced of the modern theory that playing by principle is not as correct as assessing specific positions. This is especially the case with Steinitz's Anti-French 1.e4 e6 2.e5, which is exactly the kind of move we are apt to reject "on principle." But White reaches some interesting positions, and at least avoids those annoying closed French lines, forcing play instead toward more semi-open channels that might not be to Black's liking. Similarly, you would not expect Black to do so well after 1.e4 c6 2.Nc3 d5 3.Nf3 Nf6! 4.e5 Ne4!? (author Igor Khenkin also suggests 4...Ng8!?) when White is hard pressed to find an advantage. I had similar trouble meeting 1. e4 c6 2. Nc3 d5 3. Nf3 d4 4. Ne2 c5 5. Ng3 (perhaps 5. c3!?) 5...Nc6 6. Bc4 Nf6! (see Goeller - Brandreth, USATE 2009), and Khenkin's article combined with my own experience is putting me off the Two Knights Caro-Kann lately. Finally, there is a wonderful article on the "Petroff for Beginners," focusing on the popular line at club level 1.e4 e5 2.Nf3 Nf6 3.Nxe4 Nxe5!?/?! which is one of those lines that is "supposed to be refuted" but is not quite so "refuted" as it should be, as I discussed in my article on the "Symmetrical Petroff."

All in all, another wonderful volume from Jeroen Bosch -- and I've only touched on the small portion that interested me most.

Posted by Michael Goeller at 10:38 PM

I received the following comment under a more recent post:
"I was curious if you would review this one and what you would have to say about the Lewis gambit. I leafed through this book recently in the store and after looking at the Lewis material I headed right to your BO/Urusov site to see whether you'd covered it.

When you originally wrote those pages you seemed to have a rather negative view of 3 d4?!... have you changed your opinion?"

You know, after I started reading the chapter on the Lewis Gambit in SOS #10, I did the same thing: I went to my website to see what I had written about it! I was shocked to discover that I had absolutely nothing. I even checked the Web Archive to see if I had ever written anything. Nothing. Nada. A terrible lapse, in retrospect, especially since I was familiar with Harding's discussion of the line. In any case, I don't think I was prepared to accept the crazy looking gambit of a central pawn until I started getting into the Max Lange Gambit, after which 3.d4 simply looks like a tricky transposition. And that's exactly the sort of thing I like...

I actually was able to find some of your old comments on this line. Check the following link:

That sort of seemed to conflict with your review, which sparked my question.

I stand corrected! Well, you know my stuff better than I do! That comment on the Lewis is quite hidden.

The Schiffers line is cited in SOS also, but Bosch gives instead the game Cochrane - Staunton, London 1841 continuing instead 5.O-O which he calls "a much cleverer move order" noting "for only one pawn White is ahead in development and has opened files and diagonals. Black is in obvious danger." I have to agree. And while 5...Bb6, as played, looks wrong, the alternatives allow White to play Nxd4 and f4 with initiative. It's not perfectly clear, but I am liking White.

So, yes, I was simply repeating the book back then. Now I am thinking this would be interesting.

Maybe I'll head back over to my local bookstore at lunch today and pick this up then....I'm a B.O. player, though I mostly stick to the main lines at this point.