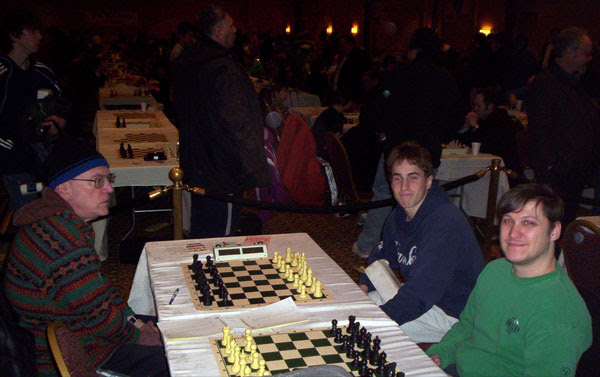 "Beavis and Butt-Vinnik" players James Critelli and Evan Turtel (right) sit down to play Kenilworth CC #1, led by Steve Stoyko (left).
I'm finally turning up some news stories about the US Amateur Team East, including a very good one out today by my fifth round opponent, Alan Kantor, titled "Beavis and Butt-Vinnik Take East" at Chess Life online. It includes some excellent photos, information about the event and a list of winners. It also presents Beavis and Butt-Vinnik's road to the championship. Of our teams' fifth round encounter Kantor writes: "We were paired against a tough New Jersey team. Despite Stephen Stoyko blocking the way we managed to squeak out victory with 2½ points." Very nice.

More details about the event can also be found at The Daily Record, which has a good story titled "Players from all over check in at Parsippany chess tournament." There you can get some numbers, which help to understand how big this event was (and why the bathrooms were so rank by day 3):

A total of 1,174 players --including nine international grand masters, 33 international masters and eight masters --are competing in the event, said E. Steven Doyle, past president of the New Jersey State Chess Federation. The field is diverse, with competitors ranging in age from five to 93 and hailing from various states on the eastern seaboard.

And, "this is the first time we are promoted to be the World Amateur Team," Doyle explained. "We are the largest world amateur team event in the world."

The tournament primarily has been held in New Jersey since 1972, and has taken place at the Hilton for the last 15 years, Doyle added.

I have already mentioned blog coverage by Jim West on Chess and Derek Slater of the Reassembler blog. Today I found Globular's Blog and The Rainy Day Blog.

And I think I discovered why they are now billing it as the "World Amateur Team Championship": there will apparently be no playoff among the four teams this year. I guess that means Beavis and Butt-Vinnik are World Champs.
Posted by Michael Goeller at 8:26 AM

Regarding the item on chessnews.org. I'm not sure I quite understand how the US Amateur ch works, but playoffs could be organized online on WCN.