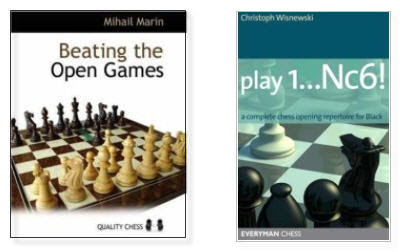 I have two books on my wish list, both due out soon and promising to provide perfect bookends for my "Knightmare Repertoire." Taken together, in fact, they will offer an almost complete repertoire for Black.

The first is Mihail Marin's Beating the Open Games (Quality Chess), which will likely supplant John Emms's Play the Open Games and Nigel Davies's Play 1.e4 e5! as the premiere Black 1.e4 e5 repertoire book, especially when he follows up with his long-anticipated Berlin Defense repertoire against the Spanish / Ruy Lopez some time later in 2007.

The second is IM Christoph Wisnewski's Play 1...Nc6! (Everyman) which I expect to update and improve upon A Complete Defense for Black by Keene and Jacobs (now out of print). Like that earlier book, it will focus on transpositions to the Chigorin Defense (e.g.: 1.d4 Nc6 2.Nf3 d5) and other lines I cover in my 1...Nc6 Bibliography. Unfortunately, that volume may not be out until 2007. But it gives me something to look forward to...

Posted by Michael Goeller at 9:17 PM

That Mihail Marin book sure looks interesting. The name alone is enough to make a book look interesting. He's a great annotator. I'll put this one on my wishlist as well as his Learn from the Legends which was allready on my wishlist. Thank's for the tip.