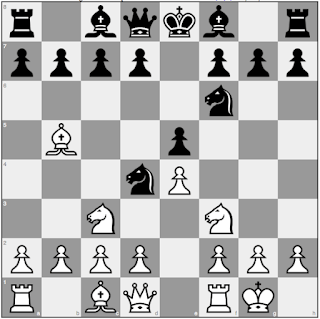 When Akiba Rubinstein introduced the variation that bears his name (1.e4 e5 2.Nf3 Nc6 3,Nc3 Nf6 4.Bb5 Nd4) at San Sebastian 1912, he signaled the decline of the Spanish Four Knights (C48), which had been among White's most popular openings up until then. Rubinstein's 4...Nd4 was widely hailed as giving Black easy equality and the formerly fearsome Four Knights gained a drawish reputation. However, in the mid-1990s, GM Emil Sutovsky (see ChessBase profile) demonstrated that White can create uncomfortable situations for the second player with the simple developing move 5.O-O! In this line, White is willing to surrender the two Bishops in exchange for rapid mobilization, an advantage in space, and clear initiative. Black typically reverts to a Philidor set-up with ...c6, ...d6, and ...Qc7, and is often forced into a passive defensive role. After looking through the literature and a large number of games, I'm convinced that this line yields White winning chances against the Rubinstein and thus should help to recuperate the Spanish Four Knights as the attacking line that it is.

It was Fred Wilson who first introduced me to Sutovsky's Anti-Rubinstein 5.O-O! and I should probably dedicate my article to him. It will likely not be my last on the Spanish Four Knights (C48), which I have found a fascinating territory for exploration (as suggested by my recent bibliography). For those who might be interested in learning more, I suggest the games Apsenieks-Fine, Stockholm 1937; Canal-Euwe, Venice 1948; and Spielmann-Rubinstein, Karlsbad 1911 (the last of which is likely the game that led Rubinstein to come up with 4...Nd4 in the first place). For non-masters looking to add the Four Knights to their repertoire, I suggest the recently re-issued An Unbeatable White Repertoire after 1.e4 e5 2.Nf3 by Larry Evans and Ken Smith (Chess Digest 1988), which offers everything you need to start playing it right away.
Posted by Michael Goeller at 2:22 PM

Maybe I can stop by your office and try this line out sometime. Although I came up with that analysis on the fly, and didn't check them against a computer yet.