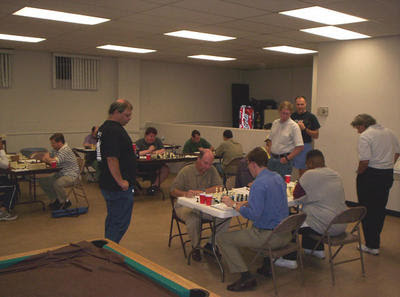 There is always a "home field advantage," even in chess, as proven by last night's runaway victory by the Kenilworth Chess Club team over the visiting West Orange Chess Club. One advantage of home field is that all of your players will show up: we got two wins by forfeit. I was disappointed not to play, but I'll take one for the team!

I collected several games from the match, including victories by Mark, Ari, Brian, and Joe. The first-board match-up between Kernighan and Radomskyj (masters who meet each other at least once per month in local tournaments) was especially exciting as Mark tried to score the win with seconds left on his clock and over 20 people watching from the wings. I should post those games and more photos over the weekend. For now, here is the final score:

Posted by Michael Goeller at 9:49 AM