I thought that one way to add a little fun to the club this summer would be to start a summer chess film festival, showing chess-themed videos and DVDs for free on our giant TV. I just picked up a copy of "Kasparov vs. Deep Blue: Game Over," which I have not had a chance to see yet. I thought I'd bring it to the club tonight and get us started (along with my portable DVD player).

I was thinking of narrative chess films (fiction or non-fiction), but I'd invite people to bring in educational or training materials as well so people can get a sense of how valuable those can be. I have seen a number of good chess films over the years and I'm sure members of the club have as well, so I'm hoping we might be able to organize the showings without even having to run to Blockbusters.

You can find a good list of films online at Bill Wall's fun site, under the title "Movies with Chess Scenes." I often find that Wall's site is "unavailable" because his traffic regularly exceeds what Yahoo's GeoCities allows for free sites, so here is the Cached version of his movies list at Google. He has also written a nice piece on "Chess in the Movies" for Chessville's website.

He tends to list films that simply have a scene of people playing chess together (such as the famously sexy chess game between Steve McQueen and Faye Dunaway in the Thomas Crown Affair). 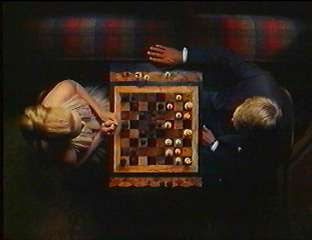 But I think we'd all prefer films where chess is more central to the plot. Among those I have in mind are:

Searching for Bobby Fischer (1993) -- Bill Wall has a good discussion of this one.

The Bishop Murder Case (1930) - may be hard to find. Basil Rathbone plays a Sherlock-type character in pursuit of "the Bishop" who leaves chess pieces as clues.

Any help obtaining copies of these or other chess films would be appreciated.

Posted by Michael Goeller at 10:49 AM

Great list of films, and a great blog. I've added the Kenilworth Chess Club link to my sidebar: the site provides lots of useful links!