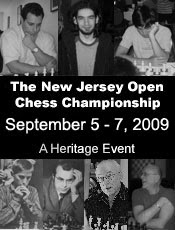 The 2009 New Jersey State Chess Championship celebrates its 63rd year on Labor Day weekend, September 5 - 7, 2009 at the Somerset Ramada Inn, 60 Cottontail Lane, Somerset NJ (Exit 12 off I-287). It looks like it will be a very competitive event, thanks in part to the low entry fee for former champions. According to Ken Thomas's website, advance entries include former NJ champs IM Dean Ippolito (2001 & 2002), FM Tommy Bartell (2004, 2005, & 2007), IM Mikhail Zlotnikov (1994 & 2007), FM Steve Stoyko (1973, 1983, and 1988), and Steve Pozarek (1979). As always, I will be dropping by to see old friends and browse Fred Wilson's book table. I am also curious to meet one participant, Max Zavanelli, who is probably the world's best known practitioner of the Urusov Gambit (whereas I may be the Urusov's most devoted analyst). Advanced entries are still accepted through September 1st by mail and September 4th online.
Posted by Michael Goeller at 5:15 PM

What am I, Ham on Rye?
Below is a refutation to a variation you and I struggled with for years. Pc3! was your idea, but I found the right move order

I would have said this privately, but you no longer answer my email.
Also my aging eyesight has a real problem with "identify this script verification.

Sorry, Max -- didn't mean to snub you. Your contributions are large also -- though Zavanelli's get more press and do generally end up as my main games in analysis. You are certainly a world authority on the line. As for the email: I rarely receive messages directed only at me, so I might not respond for that reason. I suppose you are trying to draw me into conversation, and I should take the time more often. But my day job is more time consuming than you might suppose.... I am intrigued by Bxf6, which does seem to reach your h4 lines by transposition -- very interesting. It is certainly more unclear than other choices (such as Qh4!? which has some attractive lines if Black does not play the forced Re8). Many of the others look like forced draws with best play by Black.

I'll have to review your recent correspondence... And I look forward to seeing this game at its conclusion. It might inspire me to do a Urusov update.
Mike