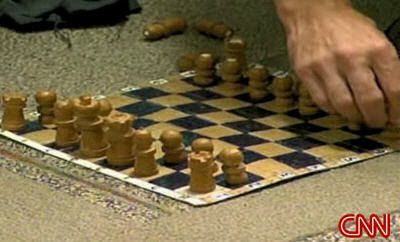 Hostages display the chess set that helped them survive.
ChessBase News reports that the rescued American hostages held by the FARC in the Columbian jungles told a CNN interviewer how chess helped them survive their harrowing ordeal.  One of the hostages took three months to carve a chess set by hand using a broken piece of machete, and the hundreds of hours that he and his fellow hostages spent playing the game helped them achieve a sense of freedom and escape that made it possible to survive.
Posted by Michael Goeller at 6:05 AM