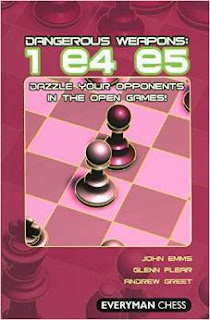 It was with the highest possible expectations that I awaited my copy of Dangerous Weapons: 1.e4 e5 -- Dazzle Your Opponents in the Open Games! (Everyman 2008) by GM John Emms, GM Glenn Flear, and IM Andrew Greet. As I have mentioned before in these pages, I am a great fan of SOS-style books like the Dangerous Weapons series, and I was impressed with their volume on the Sicilian (to which Emms contributed). And Emms and Flear have had a profound impact on my 1.e4 e5 repertoire as both White and Black with books like Attacking with 1.e4 (Everyman 2001), Play the Open Games as Black (Gambit 2000), Offbeat Spanish (Everyman 2001), and The Ruy Lopez Main Line (Everyman 2004) -- not to mention the many other great books they have written. So when I saw mention in the ChessPub forum that they were teaming up to do a Dangerous Weapons volume on 1.e4 e5, my expectation level went practically through the roof.


Well, the bubble of my seemingly irrational exuberance has not burst -- it has instead floated off into space! I have been carrying Dangerous Weapons: 1.e4 e5 around with me since it arrived in the mail yesterday, and even fell asleep with it in my hands. I tell you in all honesty: this is "the missing manual" on 1.e4 e5, and if you love the theory of the open games from either side you will have to own this book. I either play or have been curious about practically every line that they discuss, and I think they have done a fabulous job not only in the analysis but in the selection. All the lines are unusual, forgotten, or little-known yet quite sound. And I have even written about some in these pages, as Emms very nicely acknowledges in his section on what I have dubbed "The Modern Horowitz Variation of the Max Lange Attack."

Here is the chapter outline:

What I most appreciate about the Dangerous Weapons treatment of the openings is that the authors tend to be very thorough in their coverage of related lines, making it possible for you to adopt one of their suggestions right out of the book rather than having to do additional research on your own. Andrew Greet's three chapters on The Centre Game with 1.e4 e5 2.d4 exd4 3.Qxd4 Nc6 4.Qe3 are a case in point. He covers all of the major defenses that White might face. I have been intrigued by this old fashioned line since seeing some games where White players post the Queen to g3 and gambit the e-pawn in order to recoup development and exploit the open d-file. Tim Harding looked at these lines in Kibitzer #103 ("The Center Game Takes Center Stage") and I recommend you play through Greet - Georgiev, Hastings 2008 to see how difficult this line can be to handle as Black. I think what attracts me to this (besides its simplicity and relative lack of sub-variations) is that it reminds me of my favorite Urusov Gambit positions, where White castles queenside, gets tremendous play down the open central files, and often develops piece pressure against Black's King. I also like getting my Queen into the action whenever possible (as Kenilworth regular Geoff McAuliffe likes to point out!) While Harding gave me enough to sharpen my curiosity, Greet has given me everything I need to add the Center Game to my repertoire. And I appreciate that.


I feel the same about their treatment of the Four Knights from White's perspective in "Denying Black His Fun." I have analyzed this idea myself in "Sutovsky's Anti-Rubinstein Line," where I also discussed 1.e4 e5 2.Nf3 Nc6 3.Nc3 Nf6 4.Bb5 Nd4 5.O-O! as a way of combating the bane of all Four Knights players -- Rubinstein's 4...Nd4. But I have never gotten around to giving readers a complete Four Knights repertoire, even though I think I've written quite a lot on it (see The Spanish Four Knights, Part II and Part III, and my Spanish Four Knights Bibliography). The treatment in Dangerous Weapons gives you ideas against all of Black's replies, including the unlikely 4...Bd6!? which received positive treatment in Jan Pinski's book on the Four Knights and in an article in SOS a while back.

I was especially pleased by their very thorough digest of the Bishop's Gambit (1.e4 e5 2.f4 exf4 3.Bc4) which I have played on occasion and would like to know better. It does seem to carry with it a very old fashioned sensibility, so "Play Like a Victorian" sounds about right for the chapter title. There is almost something baroque, in fact, about the Bishop's Gambit, mostly because Black has a large number of playable replies at move 3, which you do not usually see covered in superficial modern treatments. You can find some analysis of the Bishop's Gambit on the web (see Tim McGrew's "The Bishop's Gambit," my own treatment of variations arising after 1.e4 e5 2.Bc4 Nc6 3.f4!? and Mjae's Le Gambit de Fou), and there was also a nice introductory essay by Susan Polgar in Chess Life back in 2005 I think (the Polgar sisters may have been its most vital modern practitioners). But the only place I have previously seen a thorough survey of Black's many replies was in Thomas Johansson's The Fascinating King's Gambit (Trafford 2005), which is a must have for anyone serious about this under-rated opening. I was surprised that no mention is made of Johansson's book in the Dangerous Weapons treatment, though I have often remarked that it has seemed almost standard practice for many years to leave out bibliographies and any form of reference in chess opening literature. In any case, the Dangerous Weapons chapter should be enough for most players.

I realize I have focused so far on the White lines that interest me, but I should also emphasize that there is at least as much (if not more) for the player interested in 1.e4 e5 from the Black perspective.

I was especially thrilled to find analysis of Bird's Defense to the Ruy Lopez (1.e4 e5 2.Nf3 Nc6 3.Bb5 Nd4!) which has long been my favorite. Spanish-expert Flear wrote this chapter, and he wrote the previously most up-to-date treatment of the opening from the Black perspective (in Offbeat Spanish.)  I don't know why he whimsically calls it "L'Oiseau" (the Spanish "Pajaro" seems more catchy), but perhaps it's because the analysis emphasizes the whimsy and originality to be found in "the Bird," where Black will often dominate the center with pawns (after 4.Nxd4 exd4 5.d3 Bc5 6.O-O c6 7.Bc4 d5! 8.exd5 cxd5) and then push forward with his wing pawns by ...h5 or ...a5 (sometimes followed by the fun Rook lift Ra8-a6-g6 with attack!) reaching very unusual positions.  Watson has discussed the ...h5 idea online, but you will almost never see anything written about the Bird today except to trot out the supposed refutation with 7.Ba4 and 8.f4 for White. Needless to say, Black has more than adequate ideas against that and Flear does an excellent job of updating his previous work.

There are so many fascinating lines here for Black that it's tough to decide what to recommend, and taken together they practically make up a complete repertoire -- yet one that gives Black a lot of choice and flexibility. The only one I have any doubts about is the Vienna Poisoned Pawn (1.e4 e5 2.Nc3 Nc6 3.Bc4 Bc5 4.Qg4 Nd4!?) which I saw mentioned in Opening Lanes #56 ("Identity"), but I have never seen an extended treatment until now.  I probably will try it out myself, but I do not think we will see many GMs doing so.

I don't know why some of the other lines are not more popular, and it may just be because they are not yet well known or GM-tested. Like Emms, I have been waiting to see GMs pick up on "The Modern Horowitz Variation of the Max Lange Attack," especially since these lines have been analyzed in great detail by Lev Guttman and Stefan Bücker in several recent issues of Kaissiber. Their analysis of the Max Lange Gambit system, which Emms treats in the first two chapters of Dangerous Weapons: 1.e4 e5, has been discussed at ChessCafe by Gary Lane in Opening Lanes #103 ("Poirot Investigates") and Bücker himself in Over the Horizons #14 ("The Magic of Move Orders") but I think Emms offers a cogent summary of the Kaissiber analysis along with some of his own thoughts. Perhaps Emms's treatment will be the tipping point for titled players to take it seriously? Who can say. But you can be the first at your club to give this a try.

I hope this review conveys some of the reasons why this book receives my highest praise and strongest recommendation. Long live the open games where there are still many twists and turns to explore!
Posted by Michael Goeller at 4:59 AM

great review. seems like your exuberance is quite rational.

As usual, you have provided the gold standard in a review. Now I have to go buy the book!

Nice review. I will have to pick up the book. I played the Max Lange as a junior, and still do sometimes on the ICC. Nice to see some GMs looking at this classic line.

Thanks for the comments. Yes, Tim, you will definitely want this book -- especially for the Bishop's Gambit stuff, which looks nicely condensed. I think "classic" lines like this and the Max Lange are sometimes "so old they're new" -- people forget, lines drop out of "the book," and a well-prepared player can just blow people away. I like the Dangerous Weapons series and this is one of the better volumes for showing classic lines.

Hey what a brilliant post I have come across and believe me I have been searching out for this similar kind of post for past a week and hardly came across this. Thank you very much and will look for more postings from you Best Waffen kaufen deutschland service provider.