Black to play and secure at least equality.

John Moldovan (The Chess Coroner) reports that FM Steve Stoyko has clinched the 2007 Kenilworth Chess Club Championship with one round remaining. Stoyko escaped with a fortunate draw against NM Mark Kernighan in a messy time scramble, where Kernighan had to take a draw with mere seconds remaining on his clock in sudden death.

The most interesting game of the night may have been Tomkovich-Sokolosky (see diagram above), where Sokolosky pulled off what should have been a stunning combination to assure at least equal chances despite his poor opening. However, he did not fully comprehend his own brilliance and allowed Tomkovich to win a piece for two pawns, leaving only a technical task to secure the point.

Special thanks to The Chess Coroner for posting all the games from the championship, including Games from Round 9, which can be viewed online or downloaded as a zipped .pgn file. 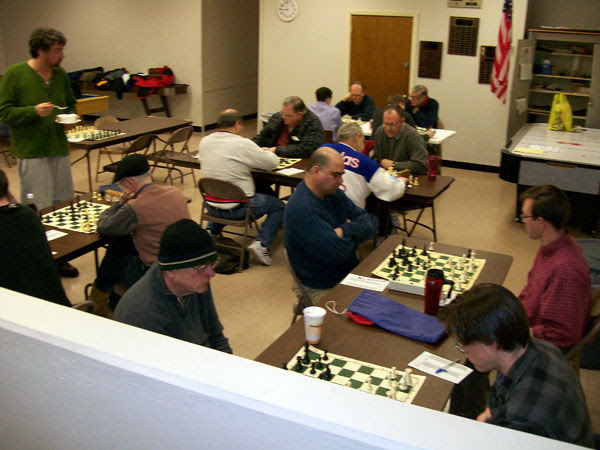