The recently concluded Turin Olympiad (where the U.S. men's team finished a respectable third) prompted me to visit the wonderfully revamped Olimpbase website, which must be one of the best chess history resources on the web. Like everyone else when it comes to "Olympic" competitions, I succumbed to nationalist pride and was most curious to know how my own nation has done over the years. I was not surprised to find that the Soviets and then the Russians had completely dominated chess team events since WWII, but I was surprised to find the U.S. teams doing well on occasion. Of course, the 1976 Haifa Olympiad, which the Eastern Bloc countries boycotted, was something of a fluke first place finish. But the second place finish in the 1966 Havana games certainly seems worth exploring further. If I recall correctly, that's where Fischer famously threw an exhibition game with Castro -- maybe the only man in the world with a bigger ego in need of gratifying.... But I was pleased to be reminded, in looking down the list, that there was once a period of total U.S. dominance, during Frank James Marshall's captaincy at Prague 1931, Folkestone 1933, Warsaw 1935, and Stockholm 1937. Fortunately, I was able to find the wonderful Book of the Folkestone 1933 International Team Tournament by Isaac Kashdan at our library, which prompted me to analyze some Games from Folkestone 1933 showing all of the U.S. players at their best. 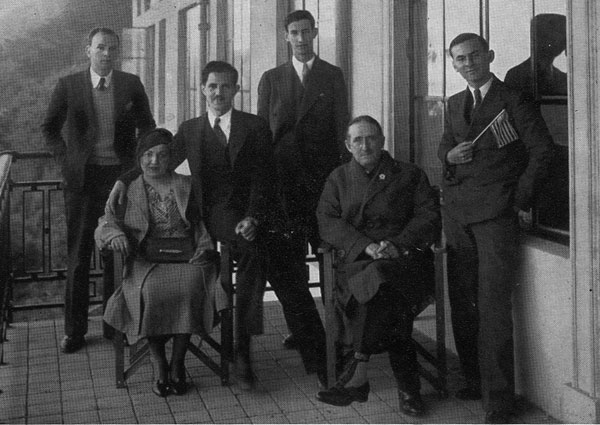 The U.S. Team at Folkestone 1933
(l-r) Dake, Kashdan and his wife,
Simonson, Marshall, and Fine.
Enjoy the games. I will likely be posting some more from team related events in the coming weeks as I continue to explore the Olimpbase site.
Posted by Michael Goeller at 2:14 PM