Tal - Stoyko 1990
Black to play.
I have annoted the game Mikhail Tal - Steve Stoyko, Simultaneous Exhibit 1990. I was visiting with Steve when he found the game score after many years. "I sacced a piece against Tal," he said as he handed it to me. It was an impressive performance by both players and a very interesting game. In the two diagrammed positions, Stoyko plays combinations that do not win material but do improve his position significantly and help to create winning chances for Black.
Posted by Michael Goeller at 10:12 PM No comments:

Ippolito - Erenburg
Black to play
Twenty-five-year-old Israeli GM Sergey Erenburg won the 2nd NJ Futurity International with a score of 7.5/9, a full point ahead of his nearest competitor, GM Leonid Yudasin.  Erenburg drew all three of the other GMs in the event and beat everyone else.  I have analyzed his best game, against IM Dean Ippolito, which justly won the brilliancy prize donated by Pete Tamburro (see "Two Brilliancies from the 2nd NJ Futurity 2008").  Ippolito's Dean of Chess Academy hosted the tourney, which ran from July 7-11.

Black plays a shocker in the diagram above, going on to win in scintillating style.  I have also analyzed the game Ju - Scekic, which featured the gambit 1.e4 d5 2.exd5 c6!?!  White played a bit too passively and was eventually overcome with a vigorous attack.  Scekic demonstrated an aggressive style in the event and his games are worth a look.

Erenburg also took clear first place at last year's NJ Futurity.  No norms were scored in either tournament.  I have posted the rest of the games online. You can also view the PGN file of all games from the NJSCF site or download the CBV from NJoyChess.

Posted by Michael Goeller at 12:13 AM No comments: 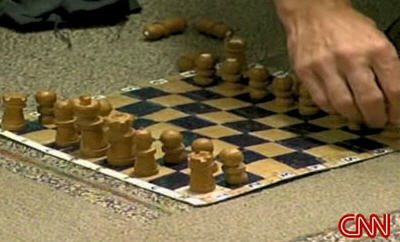 Hostages display the chess set that helped them survive.
ChessBase News reports that the rescued American hostages held by the FARC in the Columbian jungles told a CNN interviewer how chess helped them survive their harrowing ordeal.  One of the hostages took three months to carve a chess set by hand using a broken piece of machete, and the hundreds of hours that he and his fellow hostages spent playing the game helped them achieve a sense of freedom and escape that made it possible to survive.
Posted by Michael Goeller at 6:05 AM No comments:

There is an interesting article today in the New Jersey Jewish Standard titled "Chessidim" by Josh Lipowsky (USCF 1650) which details the important role that Jews have played in the history of chess.  An accompanying article by the same author discusses "Bobby Fischer: The Self-Hating Jewish Champion."

This is not the first time that the historical importance of Jewish chess players has been highlighted.  There have been a number of books (especially by Victor Keats), articles (see "Chess and Jews" by Edward Winter), and websites ("Jews in Chess") on the phenomenon.  A New York Times article a few years back ("Researchers Say Intelligence and Diseases May Be Linked in Ashkenazic Genes" -- see also ChessBase News) even suggested a genetic link, caused by the social marginalization of Ashkenazi Jews to"occupations that required more than usual mental agility."  Whatever the reason, there is no question that Jewish players have made important contributions to the game and Mr. Lipowsky's articles do a good job of detailing their history.
Posted by Michael Goeller at 2:13 PM No comments: 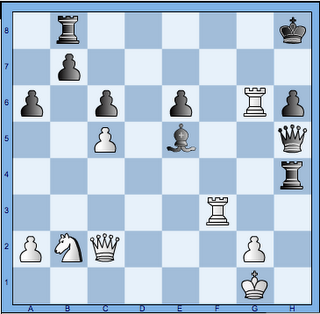 Scekic - Erenburg, NJ Futurity
Black to play and win
The New Jersey State Chess Federation website is posting a live broadcast of games from the NJ Futurity International, which features four GMs, four IMs, and the talented young players Evan Ju and Mackenzie Molner. It is being held at the Dean of Chess Academy.

Sherer - Goeller
White to play
Isn't it always the case: we think we played a good game at the club in the evening, but by the next day the computer shows us what a mess it really was.  Lately, though, I have learned to see the errors in the course of a chess game more positively, as evidence that there are always second chances.  My game with young Max Sherer in the Kenilworth Chess Club's Summer Tourney offers another example of that.  After missing my best continuation, I tried for some back-rank tactics with 21...Rd1? (see diagram above), when White has a chance to turn the tables.  Fortunately, he missed it, giving me a second chance to win the game....
Posted by Michael Goeller at 9:30 AM 1 comment: