Cheyney - Radomskyj, USATE 2006
Black to play and win most quickly.
The "pawn steamroller" was used to great effect by NM Peter Radomskyj in one of his best games from the US Amateur Teams East 2006 tournament, annotated in Cheyney - Radomskyj, USATE 2006. Pete showed us the game shortly after it was played: NM Scott Massey and I were getting dinner at a local restaurant between rounds, when Pete noticed our small analysis set and came immediately to our table. Joined by the rest of the Westfield CC team, he excitedly analyzed the game from memory, rightfully pleased with his performance. I was glad to find it contained in the USATE 2006 PGN file since it is a nice example of the steamroller theme (most famously illustrated by the great game Gufeld - Kavalek, Marianske Lazne 1962, which I also include for the few readers who might not know it).

Pete is one of the more active masters in New Jersey, playing frequently at the Westfield and West Orange Chess Clubs, and he most recently won the Legends of New Jersey Chess tournament at Westield (see the official Tournament Crosstable here). We hope to see more of his games in the future. 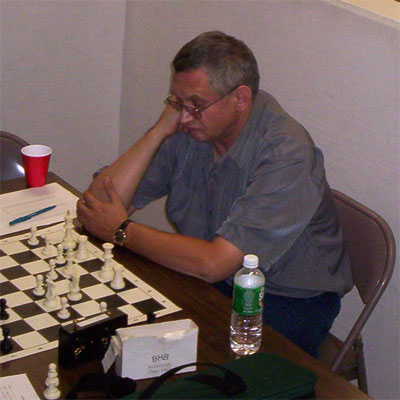 NM Peter Radomskyj at Kenilworth CC
Posted by Michael Goeller at 10:27 AM