My Grandfather at Lake Hopatcong in the 1920s

Several people have asked me what makes me so interested in the Lake Hopatcong chess tournaments of 1923 and 1926. To me it seems rather natural. I live in New Jersey and I'm interested in chess history, and they are arguably the two most important historic tournaments that took place in New Jersey. But then it occurred to me that Lake Hopatcong has always been rather special to me because my family used to vacation there or at nearby Cedar Lake (where some of my relatives still live). In fact, my grandfather definitely vacationed at Lake Hopatcong in the 1920s, possibly during the 1926 event.

I had always heard that he made a record swim across the length of the lake (the largest in the state) in the 20s. My sister, our family record keeper, gave me the following clippings about that from my grandfather's old scrap book. They are undated with no citation information, but evidence suggests they were printed in 1927. 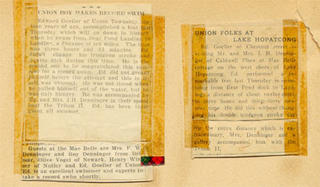 The first article likely came from a newspaper local to Lake Hopatcong, while the second was probably copied from the first and printed in a Union paper. The text of the two reads as follows:

Edward Goeller of Union Township, sixteen years of age, accomplished a feat last Thursday which will go down in history, when he swam from Bear Pond Landing to Landing, a distance of ten miles. The time was three hours and 33 minutes. Ed. didn't change his trudgeon stroke and double kick during this time. He is the second one to be congratulated this summer for a record swim. Ed. did not grease himself before the attempt and this in itself was unusual. He was not tired when he pulled himself out of the water, but he was only hungry. He was accompanied by Mr. and Mrs. J.H. Denninger in their speed boat the Triton II. Ed. has been their guest all summer.

Ed. Goeller of Chestnut street is visiting Mr. and Mrs. J. H. Denninger of Caldwell Place at Mae Belle cottage on the west shore of Lake Hopatcong. Ed. performed a remarkable feat last Thursday in swimming from Bear Pond dock to Landing, a distance of about twelve miles, in three hours and thirty-three minutes time. He did this without changing his double trudgeon stroke during the entire distance which is extraordinary. Mrs. Denninger and a gallery accompanied him with the Triton II.

My grandfather was born March 18, 1911, so he would have been 16-years-old in 1927 (a year after the Lake Hopatcong 1926 tournament). It's possible that he visited Lake Hopatcong in 1926 as well, but I have no evidence of it. His name was actually Edwin A. Goeller, but he was generally called "Ed," "Eddie" or "Buddy." He was the son of Richard Goeller, a plumber and engineer, and was quite athletic. He was an excellent swimmer (even in his old age), played football, and participated in amateur boxing (NJ Amateur Heavy-Weight Champion in the 1930s). Here is a photo of him, likely at Cedar Lake, when he was just 14. On the back of the photo it says "Ed, the champion swimmer, after a three mile swim, August 25, 1925." 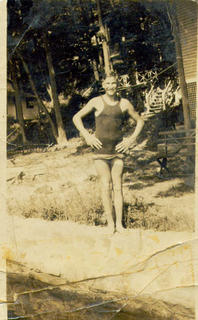 Another photo shows Mr. Denninger and my grandfather (right lower) supporting two friends on water sleds, likely being towed behind the Triton II. 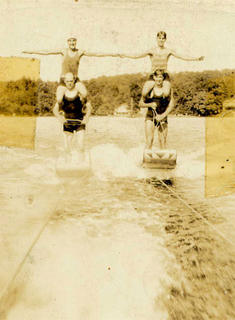 The names and the date 1928 are written on the back. According to my father, Mr. Denninger was a school teacher and family friend who later had a beautiful home in Denville, New Jersey, where he raised trout and earthworms as a side-line. He was apparently living in Union, though, at the time of the 1927 swim and had a cottage at Lake Hopatcong, which was (and likely still is) one of the only lakes in New Jersey where you could use a motor boat.

Researching the history of the Lake Hopatcong events is likely a masked way of exploring my own history. And it has led me to take a closer look at my family history than I think I have ever done.

Posted by Michael Goeller at 6:30 PM