Table tennis during the holiday party.

Though a fan of both chess and table tennis, I hadn't much connected the two games until we discovered the new "ping pong" table at the Kenilworth Recreation Center during the chess club's Annual Holiday Party.  You will often see sports analogized to chess, as though baseball, football, basketball, soccer, and practically every competitive endeavor with even a modicum of strategy was somehow akin to the royal game.  But I think that trying to apply a chess analogy to team sports inevitably misses the mark, unless you are talking about the strategy used by coaches in shifting players and creating favorable match-ups.  What makes chess so different from team sports, after all, is the importance of the individual in its play. 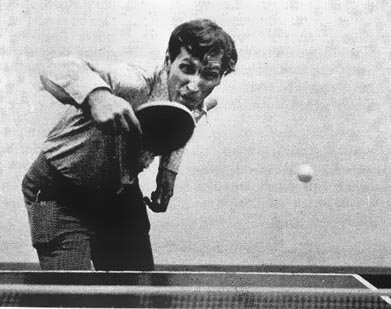 Primo Levi has an interesting chapter in Other People's Trades (1989) titled "The Irritable Chess Players," where he suggests that chess players are akin to poets because of the autocratic nature of their work:


Poets, and anyone who ever exercises a creative and individual professions, have in common with chess players total responsibility for their actions. This happens rarely, or does not happen at all in other human activities, whether they be paid and serious or unpaid and playful. Perhaps it is not by chance that tennis players, for example, who play alone or at most in pairs, are more irascible and neurotic than soccer players or cyclists, who work in teams. … Whoever is on his own, without allies or intermediaries between himself and his work, has no excuses in the face of failure, and excuses are a precious analgesic. The actor can unload the blame of a failure on his director, or vice versa; someone who works in an industry feels his responsibility diluted in that of numerous colleagues, superiors and inferiors, and moreover contaminated by “contingency,” competition, and the whims of the market, and the unforeseen. Someone who teaches can blame the program, the dean, and of course the students. …But the person who decides to attack with the bishop, the point he considers weak in his opponent’s deployment, is alone, he has no accomplices, not even putative, and fully and singly answers for his decision, like the poet at his writing table faced by “the tiny verse" (144).


Bruce Schauble made a similar connection recently on his blog, which reminded me of Levi's essay:


What I like about chess: there are no excuses. There is no luck involved. Either you play well or you don't. If you screw up, it's on you. It's a very pure game in that respect.


As anyone who has missed a slam despite a perfect set-up can tell you, ping pong feels the same way. There are many other reasons why table tennis seems the most analogous to chess of all games.

Both chess and table tennis are played within the confines of a physical space that you can grasp completely within your field of vision.  There is nothing hidden in either game.  Yet, paradoxically, in order to play both successfully you need to grasp the image of the board or the table in your mind so that you actually have a feel for where the corners are.  In chess we call this "board vision," and table tennis definitely has its "table vision."  How else can a practiced player get the ball deep into the corner of the table with a mere flick of the wrist?  The player knows exactly where that corner is in the same way good drivers know where their car bumpers are when they parallel park on a crowded city street.  The dimensions are held within your mind and translated automatically to physical action.

Players exhibit some of the same stylistic tendencies in both games.  My problems in table tennis are the same that I have in chess: I rely too much on my openings (or my serves) and too often try to attack without first gaining a position of strength on the board.  As I played various opponents I started thinking that they had the same idiosyncrasies and stylistic approaches in both games.  Mark Kernighan is a blocker and plays table tennis with the same rope-a-dope style that he brings to chess, laying back and passively returning until his opponent over-commits enough that he can "hit him where he ain't."  And Yaacov Norowitz just plays both games incredibly fast....


There is also a historical connection between the two games, as they both benefitted enormously from 1970s Cold War events (1971's "ping pong diplomacy" and 1972's Fischer - Spassky match) that elevated their profile and status in the media and exposed the same generation of folks to both games.  And members of that generation are the ones who inhabit our club. 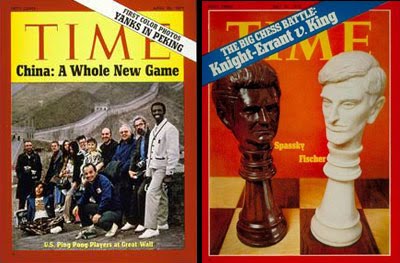 Perhaps it is this last reason why I think we are going to be playing some more table tennis at the club in the years to come.

Posted by Michael Goeller at 11:56 PM

Alekhine: "And i relax, you may laugh, by playing ping pong. Yes, ping pong is just one of my biggest hobbies." (at 3:50)

Funny, I was just listening to that same interview the other day but did not make it past the first minute! Amazing. I was looking around for a list (I was amazed Bill Wall didn't have one) of chess players and the sports they played. I imagine tennis or ping pong would be well represented.

The best analogy to chess, in my opinion, is MMA, mixed martial arts. Table tennis certainly has its similarities, but I think MMA has even more. -Howard

Yes, but how many GMs have also been black belts? Your comment does remind me, though, of the surprising popularity of chess boxing... All individual one-on-one contests have similarities to the game, I think.

Forgot about Josh Waitzkin, world champion in Tai Chi and chess IM. He draws some connections between the two in The Art of Learning.

Hmmm, ping pong is not so demanding physically, and is convenient for lazy or relatively out-of-shape folks. I would attribute its popularity with chess players to the fact that ping pong can be played in a hotel lobby without special equipment or training. (Compare: swimming, marathon running, boxing, fighting, golf, etc.)

Chess analogies always seem forced and strained to me. EG, there is a TON of chess-themed marketing directed at the legal profession. I tend to think there is no analog to chess because chess exists in a vacuum without gravity, without the laws of physics, and without sensory perception. In this chess cannot be understood in relation to anything except for its own intrinsic geometric relationships and rules. Chess is therefore more like advanced mathematics.

Another guy I played with chess with when I was just out of college, a piano player: he was a member of a table tennis club and we used to go over there and get our heads handed to us. That's when I first made the chess/table tennis connection. There were players there who you couldn't get a point from even if you were playing way above your ability level.

I agree with Katar when he says that chess can't be understood in relation to anything but itself. Chess analogies break down (as in fact all analogies do). Even though I was the advisor of a junior high chess team, I was always suspicious of the argument that chess was supposed to teach kids about thinking. It taught them about thinking about CHESS, is all. And maybe something, in the long run, about patience and humility. But I didn't, and don't, see a lot of transfer evidence that it has much to do with your ability to think well in other disciplines.

I might not have made that leap, but I'm glad you did. Great blog and ties in with our goals of taking it to the streets.