Lewis Chessmen Dispute Back in News 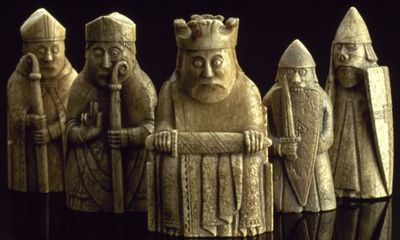 "Doubts cast on Chessmen origins" is the title of a BBC World News story that reports on the continuing dispute between Britain and Scotland concerning the origins and ownership of the famous Lewis Chessmen, which were found on the Isle of Lewis but are now mostly kept in the British Museum (with only a few at the National Museum of Scotland.) According to an article to appear in the journal Medieval Archaeology by Dr. David Caldwell (of the National Museum of Scotland), it is most likely that the chessmen were passed down as a family heirloom by a rich cattle owner on the Isle of Lewis itself, which would justify the Isle's and Scotland's claim to them. We previously linked to the fanciful story "Stale Mate" by Allan Burnett (Herald Scotland, Feb 2 2008) which offered an involving reconstruction of what might be called "the merchant theory of origin," in which it is suggested that the pieces were stolen from a rich Scandinavian merchant while in harbor off Lewis, which would mean that Scotland has no original claim. Hat tip: the BCC Weblog.
Posted by Michael Goeller at 3:58 PM