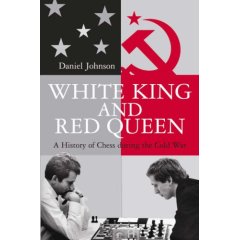 Daniel Johnson's White King and Red Queen: How the Cold War was Fought on the Chessboard, reviewed quite favorably today by David Edmonds at the Times Online (with an extract) and recently by Sally Feldman ("Check Republics") at New Humanist, is the latest in a long line of culturally and historically informed books on chess, which includes David Shenk's The Immortal Game (reviewed here last year), Paul Hoffman's King's Gambit (which is great and I've been meaning to review it forever), Michael Weinreb's The Kings of New York (also great, with a review half-written), J. C. Hallman's The Chess Artist, and Edmonds and John Eidinow's Bobby Fischer Goes to War. I imagine Johnson's will be a very fine addition to this mushrooming literature, and better (in my view) than Edmonds's own book focused on the Fischer-Spassky match, which seemed satified merely to retell (albeit in excellent detail) the story of the 1972 World Chess Championship, with little in the way of cultural context.
I've referenced Johnson's work here before, and likely some of the current book derives from his excellent essay "Cold War Chess" (also in PDF) in Prospect, which was mentioned here in connection with NM Scott Massey's 2005 lecture on Moscow 1925. He also had one of the earliest reviews of Kasparov's How Life Imitates Chess (see "Garry Kasparov's Deadly Game"), which--like Josh Waitzkin's The Art of Learning, Bruce Pandolfini's Every Move Must Have a Purpose, and Peter Kurzdorfer's The Tao of Chess--analyzes the meanings of the game for the PowerPoint crowd. Though these books are also interesting in their way, I generally prefer my chess analysis to go a little deeper than that, and Johnson's writings show that he has an impressive ability to do just that. I look forward to getting my copy for Holiday reading.
Posted by Michael Goeller at 12:08 PM