Black to play and draw.
The true test of developing players comes when they must defend against strong opposition. Will they crack under the strain? Will they play for cheap traps which might have worked for them before against weaker opponents? Or will they hang tough and defend carefully until the attacker slips up? In the games Kernighan-Camenares and Matlin-Moldovan from the Summer Tournament, we see two young players hanging tough against veterans and either drawing (as Camenares did, by forcing perpetual check in the diagram above) or winning (as Matlin did when Moldovan made a terrible blunder in time pressure while trying to force the game to a resolution). Chess is so complicated that such slips are almost inevitable, especially when you hang tough and stay sharp. 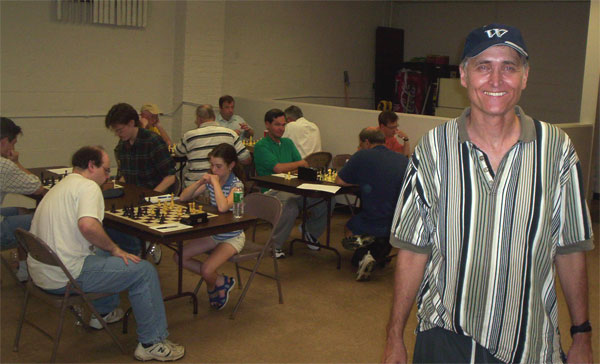 Mike Wojcio (foreground) plays his last warm-up game before the U.S. Open. To the left, the games Kernighan-Camenares and Matlin-Moldovan in progress.
Posted by Michael Goeller at 10:23 AM